Both gun owners and gun control advocates have waited with bated breath for the issue of gun control to pop up during the presidential debates.

A question on the issue would not only give both candidates a chance to talk directly to the American people about where they stand relative to gun control and the 2nd Amendment, but it would also reveal their respective knowledge and affinity for a topic that is deeply important to many Americans.

On Tuesday night, during the second presidential debate at Hofstra University in Hempstead, N.Y., a member of the audience finally raised the issue.

“President Obama,” Nina Gonzalez, asked, “during the Democratic National Convention in 2008, you stated you wanted to keep AK-47s out of the hands of criminals. What has your administration done or planned to do to limit the availability of assault weapons?”

Tellingly, Obama’s initial reaction was to give a shout out to gun owners, to tell them that he supports gun rights and the 2nd Amendment.

He then segued into a story about meeting a shooting victim from the Aurora, Colorado, tragedy, which allowed him to get to the gist of his answer.

“So my belief is that, (A), we have to enforce the laws we’ve already got, make sure that we’re keeping guns out of the hands of criminals, those who are mentally ill. We’ve done a much better job in terms of background checks, but we’ve got more to do when it comes to enforcement.”

“But I also share your belief that weapons that were designed for soldiers in war theaters don’t belong on our streets,” Obama continued, echoing one of his campaign platitudes.

What’s really going on here?  Obama has attempted to curry favor with both camps.  Notice his careful choice of words that are designed to telegraph support to both camps.

For the pro-gun camp, “I believe in the Second Amendment,” “enforce existing laws,” his half-hearted endorsement of the AWB, “seeing if we can get an AWB reintroduced.”

For the pro-gun control camp, the remark about the guns in war theaters “don’t belong on our streets,” the mention of reintroducing the AWB, the coded use of “cheap handguns” (Should we make handguns more expensive?  Should we make them illegal?).

Why is Obama choosing to straddle both sides of the issue?  Because he has seen the polls; he knows that the majority of the public favors gun rights.  Were he to stridently call out for harsh gun control reform, chances are he’d lose votes, particularly amongst moderate pro-gun voters (those who may own guns or like guns, but don’t see gun rights as a make or break issue).

All that said, his pro-gun control constituents were pleased with his answer, believing that his true intentions lurk beneath the surface of his coy rhetoric.

Dan Gross, president of the Brady Campaign to Prevent Gun Violence, told the Chicago Tribune that he was encouraged to hear Obama mention the ban.

“It’s not surprising,” Gross said. “We’re very confident that he knows in his heart what the right thing to do on this issue is.”

As for Romney, well, for obvious reasons Romney has never been comfortable talking about gun control or gun rights.  This was plainly evident during his response to the question (and, perhaps more apparent, when the segment ended and he voiced notable enthusiasm for the next question, “Boy, great question and important question…”).

While he did say the right thing, “Yeah, I’m not in favor of new pieces of legislation on guns and taking guns away or making certain guns illegal,” and the U.S. should “make enormous efforts to enforce the gun laws that we have and to change the culture of violence that we have,” he didn’t say it with the affect or conviction that a true pro-gun candidate would have.

See, he missed a great opportunity to explain to the American people why it is he doesn’t support restrictions on guns.  He could have, for example, just briefly mentioned the correlation between the drop in crime and the expansion of gun rights, in particular, concealed carry rights over the past two decades as a reason to oppose gun control reform. 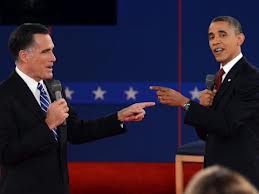 Romney also made a glaring gaffe, which revealed his limited knowledge of gun laws and a disconnect with the gun community.  In talking about fully automatic weapons, he made the following comment:

On a positive note, Romney brought up the fatally flawed Operation Fast and Furious, which was somewhat of a tangent according to the moderator, but a clever pivot nonetheless.

“The – the greatest failure we’ve had with regards to – to gun violence in some respects is what – what is known as Fast and Furious. Which was a program under this administration, and how it worked exactly I think we don’t know precisely, where thousands of automatic, and AK-47 type weapons were – were given to people that ultimately gave them to – to drug lords,” said Romney.

He could have made a stronger indictment against the President and, specifically, Eric Holder for their combined ignorance (and/or incompetence) concerning the botched gunrunning operation or brought up the name of slain U.S. Border Patrol Agent Brian Terry to really drive the point home that the Obama administration screwed up.

But the mere mention of it should please gun owners (much in the same way the mention of the AWB pleased gun control advocates).

In the end though, whether it’s out of a lack of knowledge or comfort in discussing the subject, a fear of disenfranchising a largely pro-gun public or a viewpoint that it’s not really a pressing matter, it seems that gun control (and, by extension, gun rights, the 2nd Amendment, etc.) is a subject that both candidates try to avoid when possible.