Pink Guns and Accessories to Remind Us of Breast Cancer Awareness

It’s that time of year.  October is here.  The leaves are falling, the Cowboys and Bears on Monday night football are wearing all sorts of flashy pink accessories in support of breast cancer awareness, and everything pink at my local Rocky Ridge Shooters Supply is flying off the shelf faster than the UPS man can bring it in the door. While they may be pretty and pink, these guns and accessories are more GI Joe than Barbie.

Breast cancer strikes 1 in 8 women and 1 in 1,000 men and according to the American Cancer Society, there are more than 2.9 million breast cancer survivors in the U.S. Odds are good we all know somebody affected and would like to help find the cure  The disclaimer here?  Just because a gun is colored pink does not mean it supports breast cancer research.  Only half of the items listed below were made with breast cancer awareness in mind.  Kudos to all those, as well as others in the industry not listed here.

While we certainly want to support the cure, the time is also right to consider the upside to the color.  Breast cancer awareness month has grown beyond the terrible illness itself to recognition and empowering of women.  I know of numerous women and young shooters who became interested in the shooting sports and firearms because they first fell in love with a “pretty pink gun.”  While pink may not be any of our favorite colors, we can’t ignore the fact that these patterns draw more gun owners, shooters, young hunters, and firearms enthusiasts to our ranks—a fact which helps keep our passion alive.

This is by no means a complete listing of all guns offered in the color palette. And don’t forget, there is no shortage of hydro dipping sheets in all shades of pink and pink camo patterns for customizing any gun.

This is one serious pistol backed by a big name.  Smith & Wesson collaborated with professional shooter Julie Goloski-Golob to design this model with a polymer frame and black melonite stainless barrel and slide.  Chambered in 9mm, this M&P9 is a full size frame pistol capable of holding 17+1 rounds with a fiber optic front sight and warren tactical rear sight.  The gun weighs 24 ounces, its striker fired action trigger system pulls at 6 ½-pounds, and the gun can be easily customized.  It comes with five interchangeable palmswell grip sizes – two pink grips in small and medium along with the three standard black sizes. 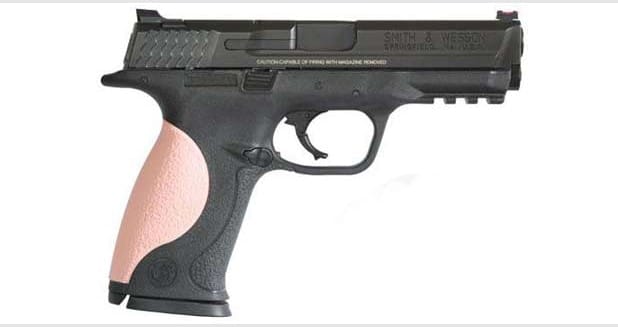 The best part of this design?  In 2009 S&W announced its first quarterly donation to the Massachusetts affiliation of the Susan G. Komen for the Cure organization through proceeds collected from the sale of the M&P9 JG.  The slide is engraved with the awareness ribbon.  This is a class act by S&W, and is still going strong.  Suggested retail is just over $600.

These Taurus handguns are available, as expected by the model numbers, in both .25 ACP and .22  Though these particular models have been discontinued by the maker, they are still readily available through the major distribution houses, and seem to remain popular on gun store shelves with those seeking a small, concealable and very un-intimidating little handgun.  Whether these models—or several others listed here—are viable carry options remains a debate for another day. 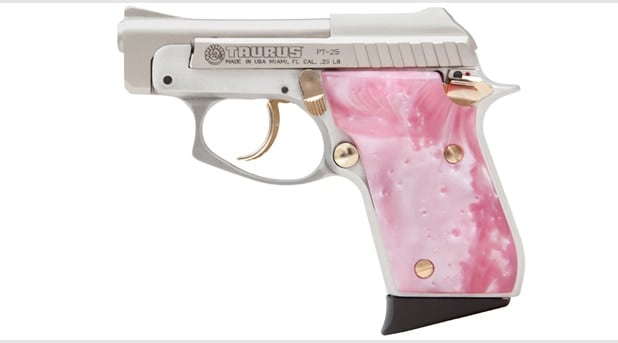 This pair of PT’s is available with either sleek pink mother of pearl or brighter pink laminate wood grips.  These pistols feature a blowback action, tip-up barrel, and weigh in around 12 ounces.  Both models show low profile fixed sights.

These guns are available around the $200 mark.

Charter Arms shot at the female market has found success with several models of its Pink Lady.  The Pink Lady Undercover Lite seems to be the twin to the maker’s standard Undercover Lite .38, but with a splash of color.  The Undercover Lite comes in the two-tone pink and stainless finish with 2-inch barrel and five-shot .38 special +P.

Fabricated of aluminum, it weighs in at a light 12 ounces like the Taurus PT25, but packs a bigger punch. 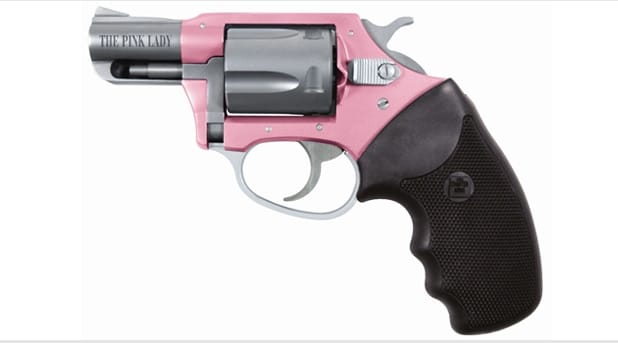 For those who enjoy the Undercover Lite but prefer an internal hammer, Charter offers the Pink Lady Off Duty, an enclosed-hammer double action revolver.  Charter Arms does a nice job catering to multiple markets, as they also offer the Pink Lady Southpaw with all controls reversed for left-handed shooters.  And if for any reason the shooter is not ready for a .38 special, Charter also offers a version of the Pink Lady in .32 H&R.  These guns retail around $425.

I have to admit I’m not the biggest lover of the color pink, but this is a pretty sharp looking gun.  Made by S&W, the M&P 15-22 Pink Platinum is a TALO exclusive.

This is a dedicated M&P15 format rifle built as a .22 LR semi-auto.  This particular model Pink Platinum has the threaded barrel with A1-Style Compensator, six-position collapsible stock, and holds 25 rounds.

The gun is solid, with a 16-inch carbon steel barrel and fires with a blow back action.  Sights are adjustable A2 post front and dual aperture rear.  It weighs in at 5.5-pounds bare, though there is definitely room to accessorize.  S&W does not offer a retail price for the weapon, but rather defers to TALO wholesalers, where prices range from $475-600. 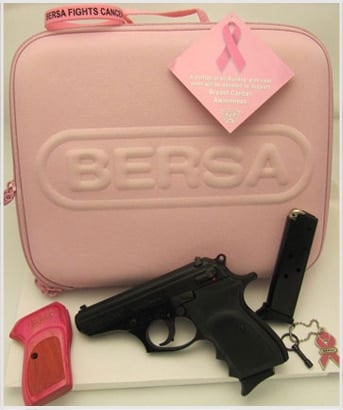 This awareness version of the Bersa Thunder .380 is a twin to its regular model, save for some great bonus pink accessories allowing the user to customize the gun.  It’s a semi-auto .380 that shoots like a dream.  There’s the standard seven-round magazine with extended finger grip, 3-dot sights, and the whole thing weighs 20 ounces.

Not only does this little gem carry Bersa’s reputation for reliability and affordability, but Bersa itself has announced that a portion of each kit is donated to breast cancer awareness.

The Pink Thunder comes with a stock set of rubber wrap around grips with finger grooves, but is dressed with a sharp set of limited edition pink wooden grips.  A pink awareness wristband with the logo “Bersa Fights Cancer” has been added to the kit.  Everything comes in a pink molded case embossed with the Bersa logo.

The special kit is available through all major dealers at an affordable price around the $300 mark.

What’s better than killing two birds with one stone? Thanks to Federal Ammunition, shooters can now smash clays and support breast cancer research at the same time. 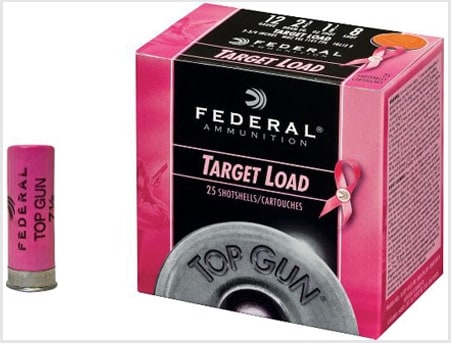 In mid-2011 Federal debuted its now highly popular special edition Top Gun Target loads with distinctive pink hulls in a pink box emblazoned with the awareness ribbon.  They are available in 12 gauge 2-3/4-inch #8 shot at 1145 fps.  As with other Federal Top Gun loads, they are reasonably priced, and as such, I’ve seen many men and women shooting them on the trap field and sporting clays range.

According to the manufacturer’s website, an on-the-box royalty program sends proceeds directly to support breast cancer research.  This is a great and inexpensive way for sporting shooters to both stock up on ammo and support the cause.  Besides, there is nothing un-manly about shooting pink shells for this cause. 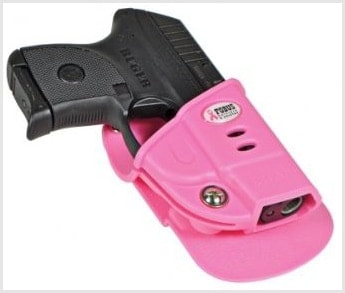 According to the Optics Planet sales website, for each KT2G Pink holster sold, Fobus will donate $5 to the Susan G. Komen for the Cure Foundation.

The holster can be customized with the retention adjustment screw. As with other Fobus Evolution holsters, these have one-piece holster body construction, steel reinforced rivet attachment system, and protective sight channel. Suggested retail price on the holsters ranges from $25.99t to $37.99.  It appears the limited run has come to an end, but the holsters are still available through most dealers.

Brownell’s line of “Shoot Like a Girl” gun cases offers quality protection for your guns as well as supporting the fight against breast cancer. 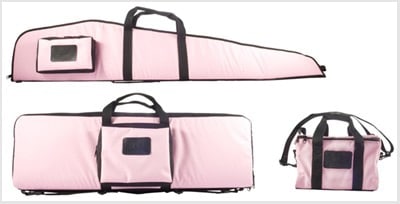 According to Brownell’s press release, they will donate 10 percent of the proceeds to the American Cancer Society to help fight breast cancer.  They offer three choices with the Pistol Range Bag, Scoped Rifle Case, and M4 Rifle Case, all made in the USA and supplied in pink in honor of the breast cancer awareness campaign.

The cases are made of 1,000-denier Cordura nylon with black trim, non-marring interior foam padding, large YKK zippers and double-stitched 1-1/2-inch web carry straps.  A leather-trimmed clear ID window is also included.  The three cases range in price from $75.99 to 125.99.

The Moral of the Pink Story

Even though most firearms enthusiasts will not be tucking pink .22 pistols in a pink holsters or stashing rifles in pink cases, don’t forget that Christmas is right around the corner.  What better place to shop that your local gun store?  But lets not forget what’s most important.  Do what you can to help raise awareness, support those who suffer – and along the way, help share our passion, empower others, and put a gun into the hands of a new shooter in your life.  When you walk into your own local gun shop and see the pink guns standing out amidst a sea of black, remember those who have lost their battle with this illness and those who still fight it today.