The whole UFO conspiracy theory has been a thorn in the USAF’s side for years, especially after the Roswell incident. The USAF has been brushing off claims that they have been experimenting on alien corpses, but it turns out that they’ve had plans for a flying saucer all along. Who would have ever guessed that the conspiracy theorists were actually right?

Well… sort of. The USAF was exploring flying saucer technology, but the blueprints didn’t come from Alpha Centauri – they came from planet Earth. The USAF recently declassified schematics and a government report of a bona fide flying saucer. 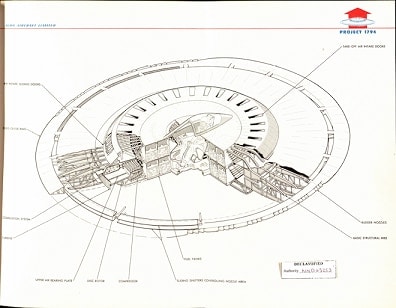 It really looks like they got their inspiration from science-fiction movies. Not only is it shaped like a Martian UFO, but the designers also apparently hoped that it would have performed like a cow-abducting saucer. This aircraft would have been able to achieve vertical take-offs and landings, and it would have had a top speed between Mach 3 and Mach 4. So really, it wouldn’t have been that far off from modern-day military aircraft. Just think of it as a Frisbee-shaped harrier jet.

The designers might have been a little bit unrealistic with the design, though. This schematic, which was under consideration back in the ‘50s, would blow modern military aircraft out of the water (or in this case out of sky). Let us put things into perspective. The F-35 fighter jet, which is still so brand-spanking-new that it’s currently undergoing rigorous flight tests, has a top designated speed of Mach 1.6. That’s about half the speed of this flying saucer.

So, maybe a functional flying saucer really is science fiction. Keep in mind that in the world of engineering, form follows function. An airfoil helps an aircraft stay in the air. If you cut out the wings and replace it with a circular disc, then you have to figure out a whole new system to keep the thing flying. It looks like flying saucers will be a pipe dream until somebody figures out anti-gravity technology.

Come to think of it, during Back to the Future II Marty McFly rode on a hoverboard in the year 2015. That means that we can expect hover technology any day now. We’ve already got laser guns, so we’re only a few jet packs and flying saucers away from the future we’ve always dreamed of.