Last March, Richard Lee Norris underwent what doctors at the University of Maryland Medical Center described as the most extensive and advanced face transplant ever performed, as Guns.com previously reported.

During the 36-hour procedure, surgeons gave Norris new teeth, a new tongue, a new nose, new lips and a new jaw, all from a donor who matched Norris’ skin color, blood type and facial structure. 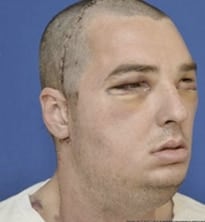 By all accounts, it was an incredible feat and within 4-6 days Norris already showed signs of recovering, he regained his sense of smell and he was starting to move his new tongue.

However, given the extreme nature of the procedure questions and doubts still lingered about Norris’ long-term recovery, would he really become a functioning member of society again?

Well, incredibly, seven-months after the surgery, Norris was able to answer that question himself.

“For the past 15 years I lived as a recluse hiding behind a surgical mask and doing most of my shopping at night when less people were around,” Norris said, according to a press release from the University of Maryland Medical Center.

“People used to stare at me because of my disfigurement,” Norris added. “Now they can stare at me in amazement and in the transformation I have taken. I am now able to walk past people and no one even gives me a second look.”

Norris accidently shot himself in the face in 1997.  It’s unclear exactly what happened that day.  Now, though, what is clear, is the 37-year-old is on his way to starting a new life.

“My friends have moved on with their lives, starting families and careers. I can now start working on the new life given back to me,’ he said in a release to NBC.

But the road ahead is not easy. While Norris can now smile and show expression on his face, motor function on the left side is at about 40 percent normal, according to doctors.  On the right side of his face, it’s at about 80 percent.  They added that he eats primarily by mouth and is able to smell and taste.

“I have been undergoing physical therapy and also speech therapy,” Norris said. “I have been doing very well regaining my speech back. Each day it improves a little more.”

Norris’s Doctors have been extremely pleased with his progress thus far.

“Richard is exceeding my expectations this soon after his surgery, and he deserves great deal of credit for the countless hours spent practicing his speech and strengthening his new facial muscles,” Dr Eduardo D. Rodriguez, professor of surgery at the University of Maryland School of Medicine and chief of plastic, reconstructive and maxillofacial surgery at Shock Trauma, said in the statement.

“He’s one of the most courageous and committed individuals I know,” added Norris’s lead surgeon.

Rodriguez’s medical team receives funding from the Office of Naval Research, which hopes to use the team’s research and findings to help wounded soldiers coming home from Iraq and Afghanistan.

According to DoD estimates, there are approximately 200 troops who may be eligible for face transplants.