Okay, boys and girls, let’s play a game. I’m going to quote a paragraph from the November issue of a prominent gun magazine, and you spot the Special Word. 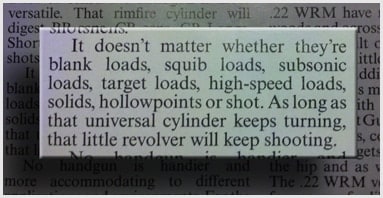 Did you spot the Special Word? The word for today is “squib.”

Here’s the definition of a squib load, courtesy the National Rifle Association’s “Guide to the Basics of Pistol Shooting”: “A squib load occurs when the cartridge develops less than normal pressure or velocity after ignition of a cartridge. Squib loads can cause a bullet to fail to exit the muzzle and become lodged in the bore.”

And contrary to what the gun magazine article says, you don’t want to keep shooting your little revolver after a squib load. If the gun goes boom again after a bullet has lodged in the bore, you could get one nasty boo-boo.

My friends who shoot competitively tell me it’s a rare event, so rare that most of them have never experienced a squib load. They say it usually happens with improperly charged hand loads rather than factory ammo.

It’s not so rare, however, that I have not experienced a squib load personally. And to beat it all, I had this experience while shooting a factory-loaded cartridge from a box of Winchester .38 Special, the 130-grain full-metal jacket “target/range” type that comes in a white box.

It was December of last year. I had taken my Smith & Wesson 642 Airweight—a delight to pocket carry, but not the sturdiest of frames—to Cherokee Rod and Gun Club in Kingsport, Tennessee, for a workout. I had fired maybe a dozen rounds when I experienced the deafening click of a failure to fire. I nearly squeezed off another round, but something deep in the recesses of my subconscious made me hesitate.

I played back the last second or so in my head. Even through my hearing protection, I was sure I had heard a hiss. And when I looked at the revolver closely, there was the tiniest curl of smoke exiting the front of the cylinder.

I was alone on the range, but I swear I heard the words “squib load.” I think the voice was a lucid memory of my NRA pistol instructor, Bob Camponovo, teaching the part of the class where we covered failures to fire.

Opening the cylinder made me just a little ill. As you can see in the picture accompanying this article, the bullet was wedged in the barrel, seated just inside the forcing cone. And by “wedged,” I mean I had to knock the bullet out with a wooden dowel. Had I pulled the trigger, the cylinder would have rotated, and the next round would have gone off behind this blockage. 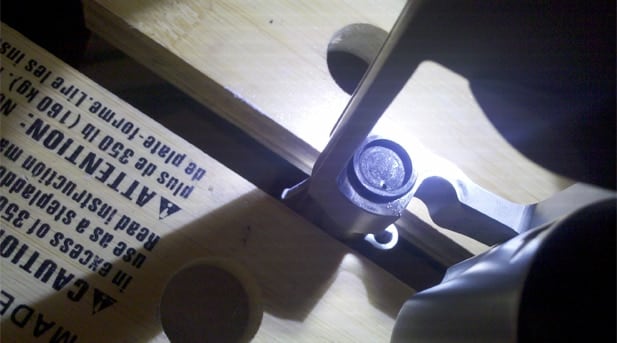 I don’t know exactly what would have happened. The pistol frame being aluminum, I don’t feel positive about the outcome. I showed all of this to an acquaintance who arrived at the range about five minutes after the incident.

“Well, I work for the rescue squad. If you had pulled the trigger again, I could’ve started first aid once I got here,” he said.

The lesson is simple. While a squib load is a rare thing, it is dangerous enough to be taken seriously, regardless of the weapon’s caliber. (If nothing else, you don’t want to damage a perfectly good gun.)

Unless the situation is life or death, take a little time to check those failures to fire. Beware the hiss. Watch for smoke.

A side note: If you experience a squib load from a factory box of ammo, you probably should report the problem to the manufacturer. Just don’t expect much of a response. I notified Winchester via phone and e-mail, and never received word one in reply.