Madonna Pisses off Colorado Fans by Brandishing Guns During Concert

In life, there are certain maxims we live by.  Example, you mess with the bull, you get the horns.  If you play with fire, you’re going to get burned.

Well, here’s one that I thought everyone knew, but I guess not.  If you attend a Madonna concert, expect to be offended.  Right? 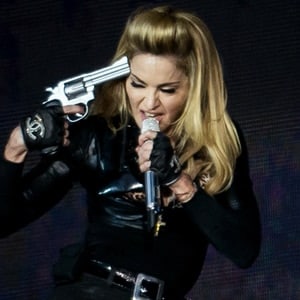 That is, in addition to pushing the envelope as far as taste and decorum and what’s sexually acceptable to most people, she has an innate ability to piss people off.

Seriously, creating controversy has always been her thing.  It’s what, I would argue, attracts most people to her shows (I mean, it’s certainly not her music), the tension sparked by not knowing what’s she’s going to do or say next.

So, given this fact, that Madonna is Madonna, a lightning rod for public discourse and celebrity gossip columns and media talks shows, etc., it was quite surprising to learn that her fans in Colorado were upset with the 54-year-old pop star for using prop firearms during her concert Thursday night at the Pepsi Center in Denver.

Apparently, many of her fans believed that she was being insensitive to the victims of the recent movie theater shooting in Aurora, where a total of 70 people were shot, 12 of which were fatally wounded.

Hundreds of those fans voiced their displeasure with her performance on 9News Facebook Page, a local Denver news station.

“WOW Madonna! Really?? I brought my kids, ages 14 and 8 to show them “The material girl” and pop star I grew up loving. And what they saw was disturbing. Why is she promoting guns and violence and mayhem?” wrote one Facebook user.

“This show should have been rated R, because no one under 17 should have to see that, because it was even disturbing for adults. I understand art and theatrics, but this just pushed it too far ESPECIALLY here in Denver,” the user added.

Another Facebook user said, “It is highly insensitive of Madonna to come to the state of Columbine High School, the Aurora Tragedy… I know it is a Madonna concert, but there is just no call for that kind of crap.”

So, the question is, to what extent is Madonna at fault for being offensive?

Well, for starters, Madonna’s MDNA tour started on May 31, 2012, which preceded the July 20th Aurora massacre.  Assuming she does a similar performance every night, she’s probably been using fake guns from the outset (there’s a ton of youtube videos depicting the Material Girl toting guns at a bunch of different concerts).  In short, she didn’t deliberately create a violent set of songs for the Colorado audience.

Therefore, it stands to reason that concerned fans in Colorado should have done a little research about the show before buying tickets, particularly for youngsters.

They should have also, as mentioned, expected to have their toes stepped on in one respect or another.  After all, it’s a Madonna concert!

Overall though, I think this Madonna situation highlights a current dilemma in society with respect to guns.  That is, the public continues to have a hard time differentiating between the actions of a few insane individuals and the inanimate objects that those individuals used to perpetrate violence.

To put it another way, Madonna’s artistic portrayal of guns – despite how clumsy and stupid and gratuitous it may have been – has nothing to do with what happened at that Colorado movie theater.

It’s certainly understandable that in the aftermath of a tragedy people want to point the finger at artists, at the media, at guns and the gun community, etc., but at the end of the day people need to remember that the real blame lies with the man who pulled the trigger.

In any event, what are your thoughts?  Was Madonna being insensitive?  Should she have tailored or altered her show for the Colorado crowd?