In a policy statement on Thursday, the American Academy of Pediatrics urged the public to support certain gun control measures as well as to provide more firearms safety counseling to parents who own firearms.

Researchers at the APP suggest that while gun-related deaths amongst children and teens have been on the decline since the mid-1990s more can be done to save lives.

Dr. Robert Sege from Boston Medical Center, who co-authored the statement, spoke to Reuters about the objective of the report, which is to remind the public that kids and teens are at risk if they have access to guns.

“Most children who get injured or killed from firearms get their firearms from home,” he told Reuters Health.

Dr. Sege explained that the impulsive nature of teens and the curious nature of kids could get them into trouble when firearms are in the home.  As such, it’s important that gun owners store guns safely in the home.

“There’s new, better data that although the safest home for children is a home without guns, that parents can protect their child simply by keeping a gun unloaded and locked, with the ammunition locked separately,” Sege said. 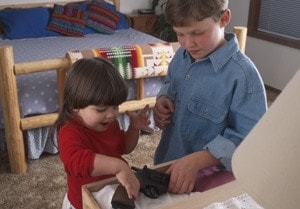 According to the report, a 2009 study showed that between 11 and 12 of every 100,000 older teens were being killed every year by gunshots.  The study added that approximately two-thirds were homicides, with the remaining third being a combination of suicides and accidental gun deaths.

Guns were responsible for almost 85 percent of all teen homicides that year, the researchers added. They were also the most common method of teen suicide.

In delivering their findings, the AAP wanted to remind gun owners that they’re not “anti-gun.”

“We are not anti-gun, we are pro-child,” M. Denise Dowd, MD, MPH, a pediatrician at Children’s Mercy Hospital in Kansas City, Mo., said on a conference call with reporters.

Though, it may be hard for gun owners to reconcile those comments with what O. Marion Burton, MD, director of the division of community pediatrics at the University of South Carolina School of Medicine in Columbia, had to say on the matter (specifically, the latter part of his comment).

“I think the best we can do is promote the safety of these items as much as we can … as well as support legislation that will make certain that we have the strongest possible regulation, particularly of handguns that are sold in this country,” he said.

As responsible gun owners, we have to acknowledge that the mere presence of guns in a home does put children at greater risk of being injured or killed by a firearm than homes that do not have guns.  It’s just common sense.  Likewise, people who drive cars are more likely to get into an automobile accident than people who don’t drive cars.  This is not groundbreaking information.

In this respect, we must teach children about firearm safety.  What’s the best thing to do?  In my opinion, take em shooting and show them, firsthand, how to safety use and handle a firearm.  And don’t just do this once, do it over and over again.  Over time, this will help them formulate good habits and get them on the right path to becoming safe and responsible gun owners.  And it will also quell their meddlesome curiosity.

Of course, the AAP has it’s own guidelines, many of which accord with what responsible gun owners already do, such as safe storage and limiting access to guns in homes with youths who have mood disorders, substance abuse problems, or a history of suicide attempts.

Though, with that said, it’s also important to understand how the data breaks down.  For example, it’s unclear if certain trends would emerge if AAP researchers isolated certain factors.

For example, with respect to gun-related deaths, how many of those were gang and/or drug related?  Also, what age group (within the teen demographic) was most at risk?

From an earlier Guns.com article, I cited 2009 numbers (from John Richardson) that indicated 2,420 out of the 2,966 deaths of children and teens killed by gun violence were aged 16 or older.  This would include “self-inflicted deaths, gang violence, legal interventions by police, accidents, and murders.”

In other words, there’s more to the story then the AAP let’s on.  And it’s important to make these distinctions because the AAP is casting such a wide net with respect to the gun control it supports.

The AAP advocates for, according to Medpage Today, “consumer product regulations regarding child access and the safety and design of guns, and regulation of gun purchases through mandatory waiting periods, closure of the gun show loophole, and implementation of mental health restrictions for purchases and background checks.  Although the 2000 guidance included a call for bans on handguns and assault weapons, the updated document calls for a restoration of the ban on assault weapons only, leaving handguns out.”

The problem is readily apparent; none of these measures target what are presumably the main culprits of youth gun violence: drugs and crime.  Which leads one to believe that if we’re going to confront this problem head on, we need to create real solutions for its primary causes.