Earlier this week news broke out about British bookstore chain W.H. Smith recently changing its policy and putting age restrictions on the sale of firearm-related publications. So now to buy a gun rag at W.H. Smith you have to be at least 14 years old.

The change in policy comes, according to the Telegraph, because of pressure applied by Britain’s largest animal rights activist group Animal Aid, and a survey, during its “National Anti Shooting Week 2012.” It’s a week in which the group raises awareness of pheasant season, a time when, as the group says, “more than 45 million pheasants and partridges are purpose-bred to be used as feathered targets.” 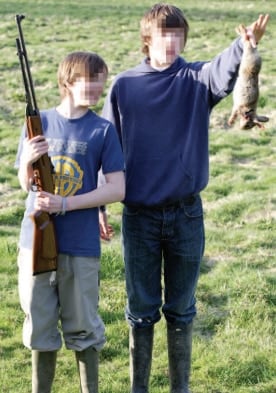 According to the press releases (click here and here), Animal Aid wanted change in all stores that carry magazines, but only called out W.H. Smith by name. The group also encouraged fellow activists to stand outside W.H. Smith locations to distribute leaflets with its anti-hunting rhetoric, which contains similar images published by the gun rags, i.e. hunters smiling beside freshly killed game.

“As a mother and gun owner, I am offended that publications about self-defense, target shooting, or hunting are being treated as pornography,” International Association for the Protection of Civilian Arms Rights Co-Founder Julianne Versnel said in a press release about W.H. Smith’s policy change.

IAPCAR executive director Philip Watson added, “Clearly this store is allowing itself to be governed by a fringe group.”

What will make your head shake even more is, according to the Telegraph, “There are no legal restrictions on magazine purchasing. Legally acceptable pornographic magazines can be sold to customers of any age.”

However, as the Telegraph points out, “There is no minimum age for holding a shotgun license in Britain, although children below 18 cannot buy or own a gun themselves and under-14s must be supervised by an adult.”

“There is no legitimate proof that censorship like this will improve a youngster’s understanding of gun safety, or self-defense and hunting. In fact, I think it will probably have the opposite effect,” Watson said.

In other words, censorship generally puts a bad taste in everybody’s mouth and sometimes leads to misinforming the public because, hey, they don’t have all the information.

The survey that supported Animal Aid’s message was funded by the animal rights group but was conducted by a third party. Of the 1,000 people who participated, 76 percent answered “Yes” that “gun magazines that show and describe the killing of animals for ’sport’ [should] be moved to the top shelf out of the reach of children” and that the sale should have an age restriction.

However, the Telegraph is currently holding a similar survey where, while this article was being written, 1,810 people answered “Yes” that children under the age of 14 should be allowed to buy shooting magazines.