Take Your Next Vacation at Miami's IDF Counter-Terrorism Boot Camp

It’s the weekend! You know what that means: it’s time to kick back and enjoy yourself for two days of relaxation. Well, except for us. We at Guns.com love guns so much that we can’t help but talk about it some during the weekends, too. For diehard gun nuts like us, fun involves a box of ammo, a distant target, a high-powered firearm, and a few of our best buds.

Some of you might prefer pistols and clay pigeons to naps pot lucks for your weekend activities. For fellow gun lovers we’d like to introduce you to Covert Ops, a Miami-based counter-terrorism adventure that’s sure to provide you with an experience that you’ll never forget.

All are not cut out for the Marines, but that doesn’t mean that you can’t train, shoot, and storm terrorist-filled compounds like Marines. Incredible Adventures, the group that runs Covert Ops, has been in the business of bringing civilians to high-octane combat scenarios since 1998 when they opened a camp outside of Tucson. 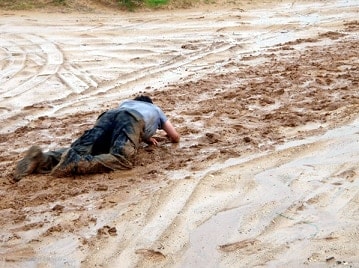 You will be led by an expert who may very well have the most badass name on planet Earth: Garret Machine.

Mr. Machine spent three years with the IDF’s elite Duvdevan unit, which is like the Israeli version of the U.S. Army’s Delta Force. Those are the guys who punch terrorists in the face, capture suicide bombers, deal with assassination attempts, and pretty much do everything that would be too tough for Rambo to handle. Here’s a breakdown of the most exciting adult summer camp you’ll ever experience. You can also check out their brochure here.

Day 1: This is a crash course on combat scenarios. You’ll learn how to use a pistol in realistic battle situations, how to respond while under fire, and battlefield first aid.

Day 2: Be sure to pack some aspirin, because the second day of training puts you through a Krav Maga crash course. You’ll be taught core moves of one of the most dangerous and effective hand-to-hand martial arts styles ever invented. You’ll be glad you went through the classes if you ever get an opportunity to throat-punch a terrorist.

Day 3: Haven’t had enough Krav Maga yet? The third day puts you through advanced Krav Maga training techniques, and then you’ll move onto vehicle combat.

Day 4: Three days should be more than enough training to take down Al-Qaeda, right? You’ll receive briefing on your mission and run through an adrenaline-pumping battle scenario involving real firearms and shooting from a moving vehicle.

Sign us up! Tickets are priced at a whopping $3,995, which will probably make it the most expensive ass-kicking you’ll ever have to endure. Call it masochism, but this miniature IDF boot camp sounds like a perfect way to spend a four-day vacation. Now, all we need to do is convince our significant others to go for Covert Ops instead of the Bahamas. Wish us luck!