The Adrenaline Zone: Shock and what it means after a gunfight

If you’re anything like me, there are times your mind wanders to “what if” scenarios. When I first contemplated buying a gun for self-defense, I had fantasies over how a confrontation might play out, should I encounter a mugger while carrying concealed. That bubble burst within about an hour of professional instruction. I learned quickly that there’s no room for Rambo when you carry. Your gun is your last line of defense – the last thing in the world you want to do is to have to unholster your weapon and use it.

And as I learned more about self-defense and the responsibilities of concealed carry, I also believed I was developing some rock-solid rules about how to conduct myself, post-shooting when the police arrive, assuming, of course, that I was among the survivors. What I didn’t know, at the time, anyway, was that there’s something that will take everything you know (and everything you think you know) put it in a box, shake it up, and scatter those pieces across the landscape of your mind, turning just about everything you say into a crapshoot. Let me explain…

The experts just about universally tell you to be the first to call 911.  The thinking is that being the first to contact the authorities puts you down in the column of “complainant” or “victim” – just about the only time in life you want to be considered a victim. It also makes your attacker by default fall into the category of “bad guy” though good officers will assess this for themselves when they arrive on the scene.  Still, first to act generally gets the benefit of the doubt from the police.

When the officers arrive on the scene, you want to Identify yourself as the person who contacted them, tell them you will cooperate fully, but that you also wish to provide them now with only your name and contact information.  You will give them a statement after you have had the opportunity to legal counsel. Then you shut up.

That familiar turn of phrase on cop shows—“you have the right to an attorney,” and “anything you say can and will be used against you in a court of law”—are from the Miranda warning which is some serious legal mojo that you want working for you, not a prosecutor. If you have a dark, wry sense of humor like I do, it’s easily to say something that could be misinterpreted by an officer, or even worse, sound as if you are admitting guilt.

Now you might think “I’m smarter than that – this will never happen to me and I need to explain this misunderstanding to the officers” Got news for ya, buddy. Yes. It can. The combination of adrenalin, shock, and tension is a perfect storm of intoxication, designed to get you to insert those things on the ends of your legs straight into that hole you use to talk.

You are traveling through another dimension…

A couple Sundays past, I was not involved in a shooting (thank God), but I was instead involved in a five-car accident. It was around 7:45 PM, just after dark, and I was heading home from installing some screening on my girlfriend’s condo porch. It was a nice, end-of-Summer/beginning of Fall evening. I was sitting at a light on a side street to a four-lane, divided thoroughfare. Suddenly, I see a truck and an SUV on a collision course. Then, things got interesting.

You remember those Sam Peckinpah movies with the slow-mo gunfights? The ones that were the precursor to the Matrix “bullet time” special effects, where you can see everything happen as if time has slowed to a crawl? That’s what it’s like to be in a situation like this. When a car is traveling at 50MPH, that translates to 264,000 feet per hour, or 4,400 feet per minute, or to get down to the nitty-gritty, 73.333 feet per second. Let’s keep it simple – 73 feet per second.

When adrenaline kicks in, everything slows down, perception-wise. I had the presence of mi 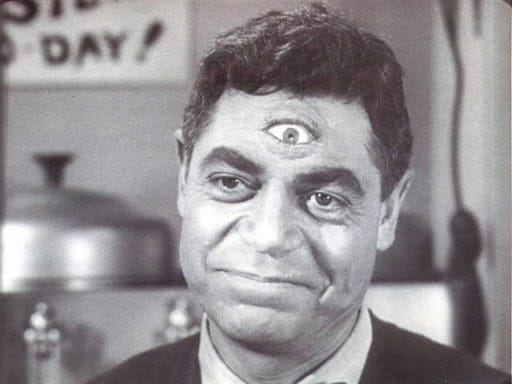 nd to think “that SUV is about to hit that truck,” then “that SUV hit that truck and the truck is spinning around, out of control.” This was then followed by “Oh, crap…he’s going to hit me and there’s no where for me to go – I’m trapped.” Then, of course, there was the impact and the aftermath. The impact happened maybe 20 feet ahead of me, pushing two cars back into mine. I suppose it went from impact to contact with my front bumper in about 2/3rds of a second, yet my mind’s eye took all that data in.

Unfortunately, when shock sets it, things get weird.

Can you believe your own eyes?

Normally, I’m a relatively logical, analytical type, but this was like being a film editor with a Movieola in front of me. It was as if I’d taken the raw footage generated by my mind’s eye and sliced it up into scenes. As I was preparing to edit the footage, this Shock guy in my head keeps coming in and knocks all the clips to the floor, forcing me to rummage around and try to figure out in which order they belong. As a result, I (mis)remembered the truck heading east-bound. It wasn’t. I don’t remember much about the dark SUV. The thing that sticks in my mind is the truck’s tailgate heading straight towards me.

Make no mistake about it. I was there. I was conscious. I was paying attention. But I made a lousy witness. Fortunately, the cop that saw the whole thing diagrammed the accident out on paper. That’s when it started to make sense to me, as the physical evidence jibed with her account – and made no sense with mine.

What I didn’t see was as interesting as what I did see, though. The truck that hit me? It’s rear right wheel came off and flew 30 feet through the air, landing in a grassy ditch in front of the service station. Had anybody been in that trajectory, they would have been killed instantly. Had the truck rolled, I’d be typing this story from the next life. So yeah, God was watching out for me that night even if I apparently wasn’t.

When the officer on the scene appeared by my car, she first asked if I was injured. I explained I was, and wanted to wait until the paramedics could examine me before getting out of the car. Then she asked me for a statement. I had the presence of mind to tell her, “I’m in shock…I’m gonna make a lousy witness…all I really remember is the truck hitting me. Everything else happened so fast, it’s all a blur.” And that’s the God’s-honest truth. After reading the accident report, I started to piece together what actually happened, and started to sort out the mind pictures I have from the experience. 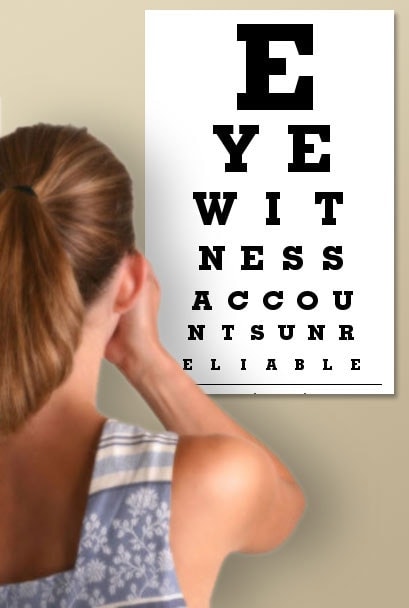 Some of them make no sense. What did I do? Discard them. Why? Because the physical evidence suggests that my memory is faulty. And all the other witnesses stories (mostly) concur with each other’s recollection.

Now let’s apply the lessons I learned that night to a hypothetical gunfight. I had a ring-side seat for this accident. You couldn’t have asked for a better vantage point so you’d think that my testimony would be the most accurate and most valuable. But as I demonstrated it’s not. Question becomes would I be a better witness in a gunfight?

Doubtful. Even if I was a dispassionate observer, adrenaline, stress, and tension play havoc with your memory. The human mind wants to enforce some sort of logic, clarity and order over events. But that’s not always possible. So the brain tries to fill in the gaps, and turn things around to make sense of it all. And that’s where the problems begin. You want to think you know what happened. Your mind tries to make sense of it. But sometimes that just doesn’t work. What you’re left with is flawed narrative and an eyewitness account that’s suspect at best, damning, at worst.

As I used to tell my daughter when she was young, “sometimes, the best thing to say is nothing.” I would add today especially when it’s going to go on the record. The experts have vast amounts of experience in dealing with the aftermath of shootings. When they advise you to say as little as possible, don’t make the mistake of thinking you’re smarter than they are, and can handle something simple like telling everyone what happened. Because in cases where adrenalin kicks in, sometimes, you really can’t believe your eyes.