Recently, the Bureau of Alcohol, Tobacco, Firearms and Explosives released a state-by-state breakdown of machine gun ownership in the U.S.

Topping the list was the great state of Virginia, with 30,220 registered fully automatic machine guns as of March.  Florida was second on the list with a total of 29,128 and California was third with 28,774. 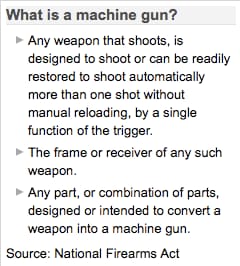 To own a fully automatic firearm, one has to wade through a ton of red tape in addition to paying a $200 tax.

One has to, for example, pass a background check, submit photo ID and fingerprints for the ATF Registry, obtain a signed statement from the local chief of police saying that the firearm will not be used illegally, and explain why he/she has a “reasonable necessity” to own the firearm.

In short, it’s a hassle.  But one that Virginians, more than anyone else, are prepared to go through.  Why is that?

“Why do we have so darn many in Virginia? Who knows?” Dana Schrad, executive director of the Virginia Association of Chiefs of Police, told the Roanoke Times.

“When you see a number like that pop out of a report you say, ‘Wow, 30,000,'” added Schrad, who has researched machine gun use in the past as a lawyer for the Virginia Crime Commission.

Schrad also said that although that’s a lot of machine guns, they don’t necessarily pose a threat to public safety “because if these guns are registered, they are less of a threat because we know who owns them and who is currently holding them.”

In this vein, gun control advocates see the onerous machine gun application and registration process as a model for how all firearms should be regulated. 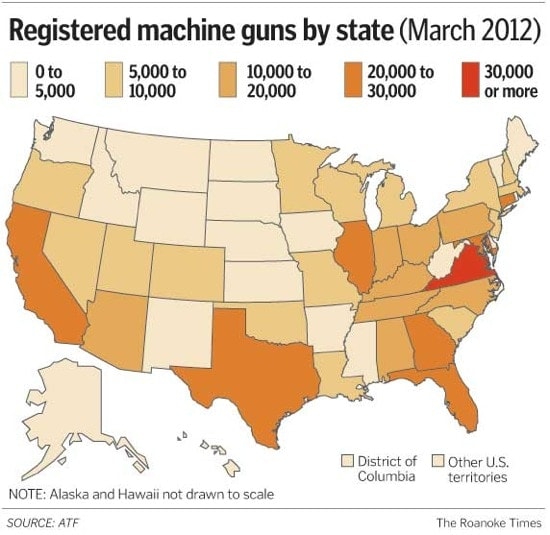 Though, back to the initial question, why are there so many machine guns in Virginia?

The experts who spoke to the RT pointed to the large population of retired military personnel in Old Dominion (assuming vets are more prone to collecting) or the increased use of military-style weapons by law enforcement as possible reasons to explain it.

However, it may just be that Virginians know how to have a good time.

“They are a blast to shoot,” said Philip Van Cleave, president of the pro-gun Virginia Citizens Defense League.

“They are a hell of a lot of fun. Shooting a gun is fun anyway, and this just magnifies it.”