The clarion voice of the gun community, the National Rifle Association, is making it abundantly clear whom it’s backing in the 2012 presidential election: Not Obama or NObama.

In its latest campaign ad, the gun lobby highlighted why it believes President Obama poses an existential threat to our 2nd Amendment rights.

“Freedom. These guys fought for it,” the ad begins, as a soldier comes home from deployment. “Now, imagine our country without it. Obama put two justices on the Supreme Court who threaten our right to self-defense. Defend Freedom. Defeat Obama.” 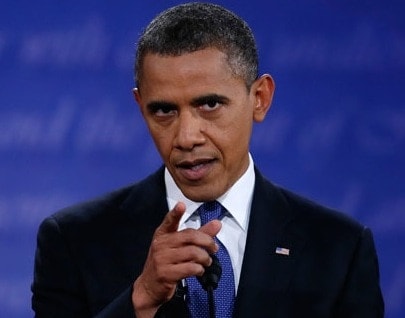 The 30-second TV spot was a direct response to Obama’s comments on gun control and gun-related violence at the second presidential debate, in which he expressed a desire to renew the Assault Weapons Ban.

“I believe in the Second Amendment,” Obama said at the debate. “Part of [the solution] is seeing if we can get an assault weapons ban reintroduced, but part of it is also looking at other sources of the violence.”

NRA spokesman Andrew Arulanandam spoke to the Huffington Post about the impetus for the ad.

“As a result of what was said … we changed our messaging in our ads to remind people that, despite what the president said [about the Second Amendment], he did appoint anti-gun Supreme Court judges,” said Arulanandam.

“We’re spending an average of $1.5 million in ads on TV, between now and the election. If more space becomes available, we’ll buy it up and use it as we see fit,” he added.  These ads are being run in key battleground states: Ohio, Virginia, Wisconsin, Florida, Colorado, Iowa and Nevada,

With respect to the message, it’s a sound strategy.

Instead of propagating conspiracy-laced rhetoric about the Obama Administration’s hidden agenda to trick gun owners (something that the NRA has done in the past), hit Obama on his most tangible, pro-gun control decisions as president, i.e. his Supreme Court appointment of Elena Kagan and Sonia Sotomayor, two liberal justices who support gun regulation.

This should serve to remind gun owners that their vote this November will have lasting repercussions.  And, according to Arulanandam, the NRA’s polling data backs this up.  He told Huffpo that gun owners have the strongest reaction to the idea of the Supreme Court justices limiting their 2nd Amendment rights.

“We’d like to gently remind more people of the impact the president’s actions will have … for next 30 or 40 years,” he said. “At his core, he is outright hostile to the Second Amendment rights of law-abiding citizens.”

Of course, representatives for Obama deny that his administration has been seeking to upend gun rights for law-abiding citizens.

“President Obama’s record makes clear that he supports and respects the Second Amendment and the tradition of gun ownership in this country,” said Obama campaign spokesman Adam Fetcher.  “He believes we can take common-sense steps under existing law to keep our streets safe and to stem the flow of illegal guns to criminals.”

Well, putting aside all the politics and just looking at this matter from a practical standpoint, there are four justices on the high court that are over the age of 70 (Scalia, 76, Kennedy, 76, Ginsburg, 79, and Breyer, 74).  It’s very possible that one or two retire in the next four years.  If that happens and Obama is in office, there’s a good chance that he follows suit and appoints another liberal justice.

His appointment may have nothing to do with gun control or a desire to change the 2nd Amendment; it may just be that he prefers liberal justices, but regardless of the reason, the results could be dire for gun owners. Already, the court is split (5-4) on whether self-defense within the home is covered under the 2nd Amendment.

In the future, when cases come before the court that challenge the Heller decision or seek a ruling on whether self-defense outside the home is covered under our right to keep and bear arms, one vote could make all the difference.

As a gun owner who plans on voting in a few weeks, it comes down to a simple question: do you trust Obama to appoint a pro-gun justice to the Supreme Court in his second term?  Or will he appoint another Sotomayor?