At a time when people are drowning in AR-15 rifles that are mostly interchangeable—they may have many interesting features that cater to specific individual tastes, but remain functionally identical, or at least extremely similar—the Faxon upper receiver is a lungful of fresh air. Combining features from the AK platform and FN FAL, this complete upper is compatible with AR lowers but is completely removed from the Stoner design.

The Faxon upper, manufactured of Faxon Firearms, a new subsidiary of Faxon Machining, barely even looks like an AR upper. It is a semi-monolithic design with the quad rail handguard a machined extension of the part that houses the bolt carrier; only the lower part of the handguard screws on. The bolt carrier has an integral long-stroke gas piston, like an AK. The recoil assembly is completely housed in the receiver and doesn’t require a buffer or buffer spring.

The gas regulator is inspired by the FN FAL, which is one of the most indestructible adjustable gas systems ever designed, with multiple settings to run under-gassed when suppressed and over-gassed when running dirty or even filthy.

The bolt carrier group rides on heat-treated steel rails mounted inside the aluminum receiver, preventing anything even remotely like carrier tilt, and are sure to last a very long time. The barrel is threaded into a barrel trunnion that is captured between the upper receiver sections and mounts to the lower receiver via the front pivot pin. 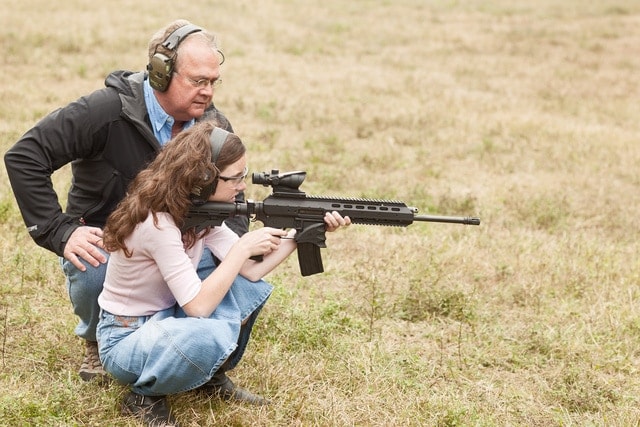 And you can swap barrels almost as easily as you can field-strip it. The receiver holds the barrel in place with just six screws. Remove the lower portion of the handguard and the barrel lifts right out, along with the trunnion, gas regulator and gas tube. No special tools are necessary and the barrel is pre-headspaced in the trunnion.

Initially the ARAK will be offered in 5.56 NATO and 300 BLK. The 5.56 upper will retail for $1,000, the 300 for $1,100, and one receiver with both barrels for $1,300. In addition to having the robust gas system, the ARAK has a non-reciprocating, reversible charging handle. Because Bob Faxon, the ARAK’s designer is left-handed, they will also be offering uppers for lefties.

Faxon Firearms is just a few days old and we’re already giddy about these uppers. If they pull it off, and we have little reason to think they can’t, as Faxon Machining is a rather large company, these are going to become very popular very fast. Time will tell how things shape up in the accuracy department, but from even these first looks we doubt reliability is going to be an issue. It looks as though the flattop rail rides a little high but that can be dealt with.

The only thing that could make that scenario better would be if they also make an interesting new buttstock to take advantage of the fact that this doesn’t require a buffer system. There are a few folding buttstocks for ARs out there, but the offerings are slim and often come with a free rifle.

We’re almost too excited for words—shut up and take my money excited. For now we’ll have to be happy with these photos by Oleg Volk, but this is one product we’re going to pay a lot of attention to. For more information check out the Faxon Firearms Facebook page.