Who robs pizza joints? Normally, that’d be more of a rhetorical question, but one would-be thief in Indiana helped to shed some light on that for us. The answer to that question is: incompetent ski mask-wearing thieves.

According to local reports, 30-year-old Freddie McCoy of Richmond, Indiana, attempted to rob Mercurio’s Pizza. We’re a little bit rusty on our Italian, but we think that “Mercurio” roughly translates to “We’re packin’ heat!” The store owner at Mercurio’s, Terry Padgett, drew his gun and fired on the would-be robber.

The robber was hit a total of three times. McCoy fled and made it to the sidewalk before collapsing. The police showed up and hauled McCoy off to the hospital, but unfortunately he passed away as a result of his injuries. 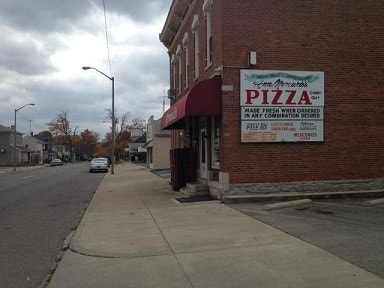 It seems that central Indiana is gradually on the rise as one of the worst places in America to be a professional thief. Less than two weeks ago, another robber attempted to rob a liquor store about 65 miles away in Indianapolis. A clerk in that case fatally shot the robber.

See, this is what has always confused us about the life of a criminal. We can sorta understand what would motivate somebody to take up a life of crime. What we don’t get, though, is why robbers target liquor stores and suburban homes. It seems that the odds of catching a bullet is fairly high no matter what you try to rob, so why risk your life for a few hundred bucks that smell like pepperonis when you could rob mansions or banks? Just seems odd – a plasma TV isn’t worth dying over, but a backpack stuffed full of banknotes just might be.

To each his own, we suppose. On the bright side, it doesn’t look as though Padgett will face criminal charges. Things are still up in the air because police are investigating, but a Richmond law firm released a statement on Padgett’s behalf, “We have confidence in the investigative process and Mr. Padgett will continue to cooperate with the detectives. Mr. Padgett acted quickly and decisively to protect both his business and his daughter.” Oh, and not to mention the “seven or eight” other employees who were working that night.

McCoy’s record, in the other hand, isn’t exactly spotless. He’s been convicted of nine misdemeanors since 2002, including two for battery and one for disorderly conduct. That doesn’t exactly scream “ruthless criminal,” but throwing on a ski mask and robbing a business kind of crosses a line.

The community has been showing its support for the employees at Mercurio’s. The store’s Facebook page reads, “We are so grateful for everyone’s care, concern, prayers, and support in such a tragic and horrible time. We will not be discussing the events that unfolded Saturday night. We will be open regular hours this weekend. Thanks again.”