You bring in your “I voted” sticker and store employees will enter your name in a raffle to win a Glock handgun or Browning rifle.

That is, it’s wrong if you’re state Sen. Vincent Fort, D-Atlanta, who on Tuesday filed a compliant with the Secretary of State’s office hoping to terminate the promotion.

For said, the raffle violates state law that bans anyone from offering money or gifts in exchange for voting or registering to vote.

But owner and operator of Adventure Outdoors, Jay Wallace, didn’t understand the senator’s beef with the promotion.

“It’s just getting people involved in the process,” Wallace told The Atlanta Journal-Constitution . “I don’t understand what his problem is. Is he afraid somebody’s going to get involved in our political system?”

Wallace said that overall the public loves the idea and have reacted well to his eight billboards around the city. 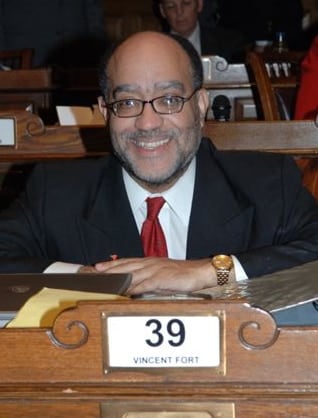 “I know I’ve gotten a lot of phone calls from people telling me thumbs-up, that they like it,” he said. Fort “is the only person I’ve heard from that has not liked it.”

On Wednesday, a spokesman from the secretary of state’s office followed up on the compliant.  He spoke with Wallace who agreed to amend the contest to include everyone – voters and non-voters – which now accords with state law.

“Should they violate what they told our office they would do, then that will be taken into account and actions will be taken accordingly,” spokesman Jared Thomas said.

In response to this change, Fort said he now approves of the contest.

“Now that that they’ve expanded it and allow all customers to participate, I think it’s a legal raffle,” Fort said. “I don’t have any objections to it if it complies with the law.”

Was this really about the law?  Or was it about targeting gun owners?

It’s difficult to say, but a quick look at Fort’s voting record shows that he’s not the most pro-gun public servant.

And in 2006, he voted against a bill that permits Georgia residents to use deadly force to defend themselves, others, or personal property in public areas as long as an illegal weapon is not used.