On Thursday, researchers at the John Hopkins Center for Gun Policy and Research released their report on gun control.  What were their findings?

Here are their key points briefly recapitulated, with the help of CNS News:

“High-Risk” Individuals Should be Prohibited from Owning Guns

A “high-risk” individual includes those suffering from substance abuse problems (alcoholics, drug addicts), anyone convicted of a violent offense, including misdemeanors, those who are charged with a felony but plea-bargain to a lesser charge.

Also, anyone under the age of 21 should be banned from owning a firearm.

“When you deny high-risk people access to guns, the evidence shows that saves lives,” said Daniel W. Webster, director of Hopkins’ Center for Gun Policy and Research and the report’s lead author, told the Baltimore Sun. “And when you regulate all gun sales, fewer guns get diverted to criminals.”

With respect to the 18-20-year-olds, Hopkins said, “We do not allow that group to legally drink beer, but in 45 of 50 states, that group can legally own a handgun.”

Boost regulation and oversight of gun-sellers:

The report also blames Congress for limiting public access to crime-gun trace data, and for providing firearm manufacturers and retail sellers with “broad protections from lawsuits.”

“Data from federal gun trafficking investigations indicate that scofflaw gun dealers are the most important channels for diverting guns to traffickers and criminals,” the report states (Really?  Fast and Furious anyone?).

They “do not make us safer and likely increase aggravated assaults,” the Center argues, rejecting John Lott’s research that shows the opposite is potentially valid.

Regulate the design of guns

“Not all firearms are created equal,” the report states. “Aside from ammunition capacity, other characteristics of firearms that are relevant to public safety include how easily the gun can be concealed, and how prone it is to misfire or fire unintentionally.”

“Contrary to recent media reports, a large majority of the public, including gun owners, favors remedying many current weaknesses in our gun laws,” the paper concludes.

“But politicians who want to correct flaws in our current laws, which enable dangerous people to get guns, could do so knowing that there is broad support for those policies, the reforms are constitutional, and the policies would enhance public safety.” 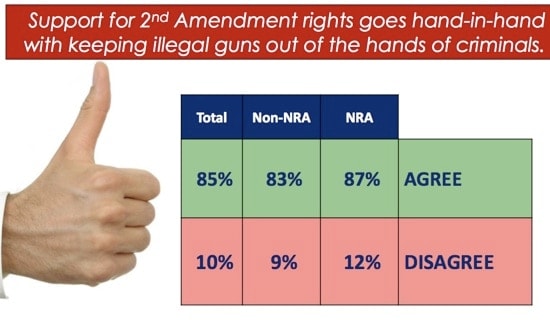 There are many red flags in this report (no specific breakdown of how drug and gang-related violence impacts the homicide rate, no acknowledgement that the National Research Council found that the AWB, while it was enforced (1994-2004), had zero impact on gun violence, no admission that cities like Chicago, Baltimore and Washington DC, which have some of the strictest gun laws in the country have disproportionately high crime rates, no talk about the government run, fatally flawed gun walking operation Fast and Furious and its deadly ramifications both along the border and in Mexico, no mention of the fact that over the past two decades there’s been a massive expansion of concealed carry rights and crime has gone down nationwide, etc.) But here are three that really stood out to me:

Who funded this study?

Yes, to be clear, that’s “Bloomberg” as in New York City Mayor Michael Bloomberg, the fearless leader of the most aggressive pro-gun control organization in the country, Mayors Against Illegal Guns.

This information is courtesy of Philanthropy News Digest:

Since graduating from Johns Hopkins University in 1964, New York City mayor Michael Bloomberg has given generously to his alma mater and other nonprofits in Baltimore, the Baltimore Sun reports.

Bloomberg recently gave $120 million to help build the new $1.1 billion Johns Hopkins Hospital and $5 million to the Open Society Institute-Baltimore. With the gift to the hospital, Bloomberg, who has amassed what Forbes estimates to be a $22 billion fortune as the founder and majority owner of Bloomberg L.P., has given some $800 million to Johns Hopkins since he paid his way through college with loans and a job as a parking lot attendant. That makes him the university’s largest donor — and possibly the largest single donor to any university in the United States.

It’s a fair question, is it not?  Who really funded the study and what findings did he/she expect to see?

In calling for the end of concealed carry rights, the Hopkins team said the following:

So-called right to carry (RTC) laws allow individuals who are not legally proscribed from possessing firearms to carry concealed weapons in public, either by making it easy to get a permit to do so, or by not requiring such permits at all. Arguments for RTC laws are premised on the idea that everyone who is eligible to legally own a firearm is law-abiding, and is at low risk for committing a violent crime. Research cited above concerning weak standards for legal firearm ownership calls this into question. A recent review of concealed carry permit holders in North Carolina examined criminal offending in the group over a five-year period. During that period, more than 2,400 permit holders were convicted of crimes (excluding traffic violations), including more than 200 felonies and 10 murders or manslaughters. An additional 900 had been convicted of a drunk driving offense, an offense commonly associated with substance abuse.

This paragraph is very misleading.  For starters, no one within the gun community argues that all CCW permit holders are perfect, law-abiding citizens.  The reality is people are fallible.

However, what can be argued, and what I showed when I examined that same NC study is that CCW permit holders are less likely to commit crimes than the general population.  This is, indeed, true.

It wasn’t just my conclusion, the New York Times indirectly admitted as much in its write up of the study:

In the end, most researchers say the scattershot results [about whether concealed carry increases or lowers crime] are not unexpected, because the laws, in all likelihood, have not significantly increased the number of people carrying concealed weapons among those most likely to commit crimes or to be victimized.

This key point was omitted from the report, which is tantamount to lazy research on behalf of the Hopkins team (though, it could also be a deliberate obfuscation of the truth).

With regards to public support for gun control, the researchers dismiss objective Gallup polls, which show that by and large the public opposes tougher gun laws, and instead choose to cite one commissioned by Mayors Against Illegal Guns and conducted by media wordsmith Frank Luntz.

I examined this Luntz poll when it was released in July and I noted that the survey is worded in an idealistic fashion, with no mention of an actual piece of legislation that would ground the questions in reality.  In other words, there’s no indication of opportunity costs or the practical ramifications of what supporting some of these measures would mean for gun owners.

Therefore, my conclusion was rather straightforward: “Overall, the poll is worthless.  It doesn’t ask any real, policy-based questions.  It’s all political fluff”.

Given the fact that this poll is not only useless but also flagrantly biased, one has to ask why a team of professional researchers with PHDs and JDs opted to cite it in their report?

While I think my complaints against the report’s conclusions have considerable merit, I believe John H. Josselyn, legislative vice president for the Associated Gun Clubs of Baltimore, had an infinitely more succinct and cogent rebuke.

He told the Baltimore Sun, “Attempting to control criminal behavior through additional gun laws is the rough equivalent of trying to control drunk driving by making it more difficult for sober people to purchase a car.”

Indeed.  To back up his claim, he pointed to a 1991 Hopkins paper that found no clear difference between homicide rates in the United States and Canada in the late 1970s, even though Americans owned far more handguns then, according to the Sun.

It goes with out saying, but instead of looking for ways to limit the availability of guns, the Hopkins team should spend its time and research dollars looking at ways to improve the lives of “high-risk” individuals, ways to get them off of drugs and keep them from resorting to a life of crime.