They are finely crafted works of art that also shoot bullets.  They’re clearly not toys.  But are these weapons or novelties?

Some of the earliest examples of small firearms used the size as a method of obfuscation.  A pen gun, for example.  Their size was only part of the disguise. 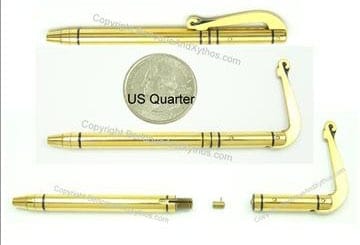 The pen gun is easy to imagine.  Both guns and pens have barrels.  The only trick is the firing mechanism.  The pens built by an unnamed artisan at micropengun.com use pin-fire rounds.

These tiny 2mm shells load into the mid section of the pen.  The pocket clip is the hammer.  When it falls, the pin is driven into the shell which ignites the powder.  The pen comes with a small ramrod that can be used to push a tiny lead projectile into the pens barrel.

As cool as it would be, I don’t think it actually writes too.  It should write.  I’ve always thought of the pen gun as a James Bond sort of weapon.  But this is clearly a novelty.

And they’re not being made anymore.  The website hints that they might be made again, and even sets a price: $265.  But no word on availability.

The 2mm pinfire cartidge is popular for independent artists who make one of a kind guns, and those who make small guns on a larger sclae.  Ron Philips, at Charleston Mini Gun Works, makes pinfire guns that are evocative of the city’s maritime past.  These little blunderbusses work off of the 2mm pinfire shells and are simple, well executed examples of guns that bridge the gap between novelties and collectibles. 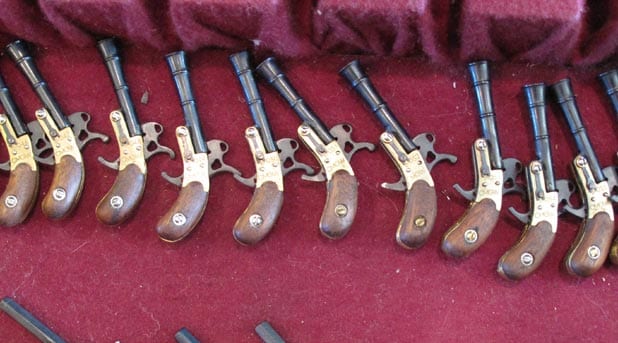 Still, these aren’t designed to fire projectiles.  This is an issue for artisans like Phillips.  If these are cap guns, there are fewer legal loopholes regarding sales and manufacture.

This one really works.  Small-gun-technology usually shrinks a single barreled derringer concept down to something very straight forward.  The complexity, when there is complexity, comes in making small working parts.

But the Swiss are known for their small intricate machines.  The Swiss Mini Gun takes the concept further, and offers the small size and the complexity of a revolver. 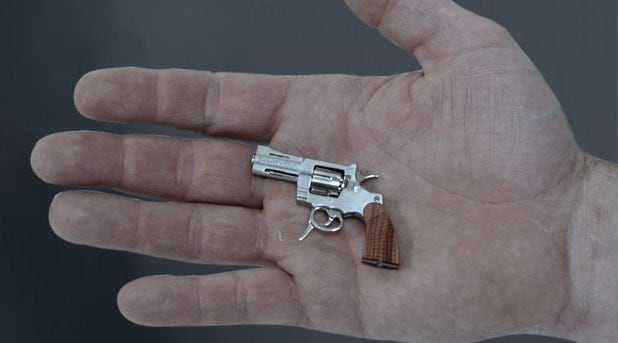 It is a small revolver.  It actually shoots small bullets.  But is it inherently dangerous?  The ATF thinks so.  Import is restricted.  Still, the folks who make the Swiss Mini Gun are quick to point out that “the power of most airguns or BB guns, which are in many countries freely on sale, can exceed over 10 times the power of our ammunition.”

But we’re talking miniatures, and not ridiculous politics.  And the revolver isn’t as complicated, mechanically, as most automatics.  How small can a semiautomatic be? 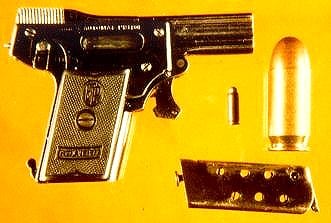 Check out the Kolibri.  Kolibri means hummingbird in several languages.

The Kolibri fired the 2mm Kolibri, or 2.7x9mm, the smallest centerfire cartridge ever made commercially available.

These were designed for serious work, but the 2mm rimfire round simply doesn’t penetrate.  And the barrel of a Kolibri isn’t rifled, so the bullets have limited range and accuracy.

Still, the 3 grain bullet clips along at 650fps.  The .45ACP pictured next to this gun weighs in at 230 grains.  That’s a big difference.  And the Kolibri was marketed, most unsuccessfully, for self defense.  These guns haven’t been made since 1938.  Kolibris in good condition sell for thousands of dollars.

And what if you want something that shoots more, faster.  A belt-fed Browning 1919, for example, only smaller?  No problem.  Lakeside Guns makes some nice working miniatures. 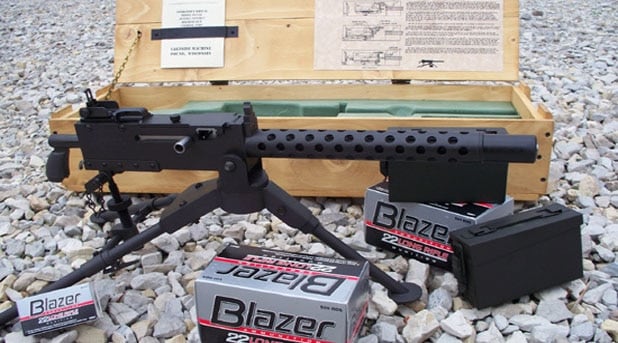 These are not as small as any of the clockwork guns we’ve seen so far, but they actually shoot .22lr, which makes them much more practical from an end-user’s perspective.  And it is a reasonable facsimile of the old Brownings.  Cartridges are loaded onto a cloth belt that feeds them into the gun.

Lakeside is currently out of these, though more are supposed to be available in January.  But they have other options, many of which are not as small.

All of these are curious.  They’re novelties.  The Lakeside 1919 is a serious gun.  The others are guns, but that seems like more of an afterthought.  They’re small works of art.  They’re examples of craft.  And they are fascinating.