Every once in a while we come across a product that leaves us scratching our heads. Usually these types of products are original, to the point where maybe someone would have invented these earlier if they made any sense. Things like the Nautilus tactical rail; while we can see a handful of people using these, they may be too tactical for your average AR owner, if you know what we mean.

And the Elftmann Tactical Dual Enhancement Trigger (DTR for some reason) is one such product. In an upside-down and backwards reversal of influences, this AR trigger is inspired by a type of trigger used with Airsoft guns.

Designed by Art Elftmann Jr., the DTR is an extended trigger that is intended to be used with both your index finger and middle finger simultaneously for added leverage. This allows you to squeeze your whole hand to quickly get off strings of shots. After growing accustomed to such triggers in the Airsoft world, Elftmann wondered why none were used on real firearms. 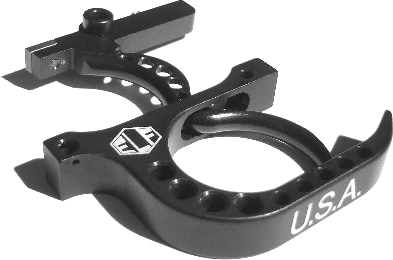 And thus the DTR was born. “After playing against and using double triggers we found them to be a superior product and we all switched to the double triggers. For years I wondered why they were not on real fire arms, after doing some research we found that the AR-15 seemed to be the weapon of choice to put the double trigger on. So we developed the DTR to fit all milspec AR-15 rifles. Now after thousands and thousands of rounds with the DTR on the AR-15 we found it to be superior on a real fire arm too.”

Shooting Illustrated spent some time with one, and despite their doubts, found little to object to. “While I admit being skeptical of the DTR’s benefits at first, my experience with the product was quite positive. Not only was it easy enough for this gimpy gun writer to install, in the case of my AR, which contains a JP Enterprises Reduced Power Spring Kit, the pull weight of the upper trigger came in at 6 pounds, 8 ounces, and an extremely manageable 2 pounds, 11 ounces on the lower trigger. The presence of the pseudo second trigger didn’t affect my ability to quickly access the fire controls or the compromise the ergonomics of my rifle. Similarly, I didn’t experience any confusion resulting from the dual bows. When considering their placement in relation with my grip, and given the proximity of my middle finger with the lower bow, the pairing not only seemed logical, but surprisingly natural as well.”

And that’s what these triggers were actually intended for: making paintball guns shoot faster. Judging from this video of the DTR in action, we thing that this trigger might give recent bump-fire stocks a run for their money. Not that it’s a cheap alternative; the DTR has costs $240, and can be purchased from the Elftmann store. It comes with the extended trigger and trigger guard and works with standard mil-spec fire control groups.

It’s just that it seems like you give up a lot for the ability to shoot quickly. Notably, you can’t use the grip and slap it simultaneously, so if you want to shoot fast, you’re going to forsake stability and accuracy. Even when you’re not smacking it around, you will have a much weaker grip purchase.

While we still have doubts about this type of trigger, we don’t doubt that there are likely more than a few paintball savants that are dying to try it out. So who here’s going to test the DTR? Show of hands?

Elftmann is working on some Ruger and Marlin .22 projects as well. We can’t say we’re not a little curious…