Let’s go back about a decade or so when the bullpup design was gaining ground with combat rifles, and most military and law enforcement shotguns were modified versions of sporting guns.

Most, but not all.  A South African company, Truvelo, was shaking things up.  The company’s objectives would seem familiar to anyone following the development of the Kel-Tec Shotgun.  Truvelo wanted a more compact shotgun with a standard barrel length.  They wanted the solidity of a shoulder stock.  And they wanted a bigger magazine.

Yet Ryan Williams, a Design Engineer at Kel-Tec says, “We’re familiar with the NeoStead. But it was not the inspiration behind the KSG, as yes, the “action” of the weapon is different (and for the longest time, not importable into the U.S.).  The KSG was actually thought up by our President [George Kellgren] about 30 years ago and was originally going to be a .410 caliber.  He actually started the prints/idea decades ago as his first company was developing.”

So there you have it.  Any similarities between the two are mere coincidence. 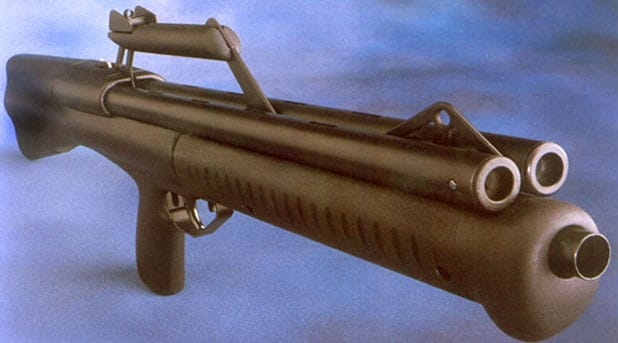 The Neostead weighs in at nine pounds.  The barrel is 20 inches.  The twin magazine tubes each hold six shells.  The rear ghost ring sight is affixed to a carrying handle.  The whole weapon is just over 27 inches long.  First made in 2001, the shotgun is primarily marketed to law enforcement and military units.  The main selling point is, obviously, its compact size which is extremely useful when exiting vehicles and moving in crowded spaces.

Unlike the Kel-Tec KSG, the Neostead has the magazine tubes on top.  This can be confusing.  At first glance, the Neostead appears to have two barrels.  But that isn’t the only unique feature.  Most pump shotguns eject spent shells on the in-strokes of the pump, and load new ones on the out-strokes.  The Neostead reverses that.  To eject a shell, the slide and barrel both move forward.  To load, simply bring the gun back.

Yes, the whole barrel moves forward and back each time the gun is pumped.  And it loads from the top.  The two tubes pop up, just in front of the stock, to allow shells to be loaded.

The KSG flipped the magazine and barrel of the Neostead upside down. Besides that other likenesses are easy to see. The length is similar.  The whole philosophy of the dual magazine bullpup 12 gauge is exactly the same.  Yet the KSG’s slide will be more familiar to users accustomed to pulling back to eject shells.  And the rails on the KSG mean customizing the Kel-Tec is much easier than customizing the Neostead.

The most noticeable difference (besides repositioning the barrel and reversing the movement of the action), would be the width of the actual pump.  I think think is one of the defining features of the Kel-Tec, and user opinion seems to be split.  Some don’t mind the extra wide pump.  Others find it to be a bit clunky. 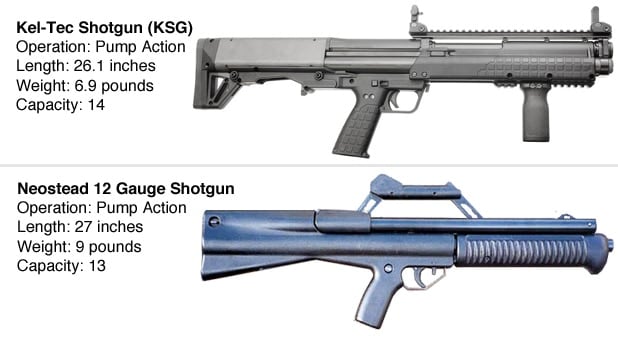 Others worry about the super short length of the KSG combined with the movement required from a pump.  Some are even putting stops or grips on the KSG’s bottom rail to ensure that their hands to slip too far forward and wind up in front of the barrel.

The Neostead mitigates that by building in a slight lip on the forend grip.  Still, it is easy to see how it would be of concern because 27 inches is not very long.

The Neostead is much more streamlined than the KSG.  Aesthetically, it is a bit more uniform.  The Neostead has some nice clean lines.  This uniformity comes at the expense of adaptability, perhaps, which the KSG certainly invites.

And maybe that’s why the ATF has kept the Neostead locked out of the U.S. market.  The ATF has banned import of the Neostead on the grounds that it doesn’t have legitamate sporting aplications.  It is a shame, really.  Not so much now that we have the KSG.  But we should be allowed to choose.

It would make a great home defense gun.  It would also be popular in Hollywood. As of now, the limited availability of the Neostead has kept it relatively obscure.