On Sunday, in an op-ed, USA TODAY’s Editorial Board lamented the fact that both Mitt Romney and President Obama are reluctant to discuss gun control on the campaign trail.

The Editorial Board surmises that the reason why gun control does not get the attention many would like it to is because the “powerful gun lobby has made candidates wary of supporting even common-sense measures such as requiring background checks for gun-show sales, cracking down on rogue dealers, forcing states to do a better job of filing mental health records to a national database, and reinstating the ban on assault-style weapons that have no sporting or self-defense purposes.”

To its credit, USA TODAY allowed NRA Executive VP Wayne LaPierre to respond to their comments in his own opinion piece that was also published on Sunday.

Not surprisingly, Mr. LaPierre had a different theory on why the candidates have the Lord Voldemort syndrome on the issue of gun control (that is to say, why they dare not speak of it):

This newspaper [USA TODAY] bemoans a lack of debate over firearms ownership in this election, ignoring a fact that even most politicians now recognize. The vast majority of Americans treasure their constitutional freedom, and they don’t trust politicians who meddle with it.

Most candidates at the national, state and local levels have declined to propose new anti-gun laws for one simple reason: They ring hollow with the American voter.

Looking at objective polls like Gallup and Reuters, it’s clear that, by and large, most Americans do not favor stricter gun laws. Though, this raises another question, why does gun control ring hollow with the American voter?

LaPierre offers this rather accurate explanation:

Americans love their Second Amendment freedom! In our country today, more people own more firearms and shoot more than ever before. They have no interest in more political schemes that limit their access to that freedom while doing nothing to affect violent criminals. 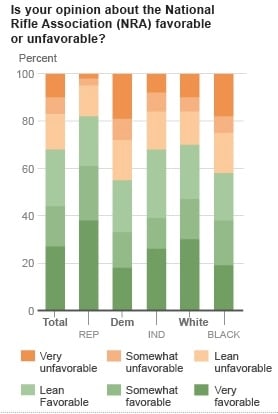 So, it’s really a two-part answer, (1) Americans love guns and embrace gun culture, which again, in looking at the polls, is true, and (2) the majority of Americans recognize that gun control is wholly ineffective at thwarting criminal behavior.

With respect to the inefficacy of gun control, take for instance the Clinton-Era Assault Weapons Ban, which the USA TODAY Editorial Board mentions in its piece, ultimately agreeing with President Obama in that it should be reintroduced in Congress.

As I’ve iterated before, a National Research Council panel examined academic studies of the AWB and found that it “did not reveal any clear impacts on gun violence” and noted “due to the fact that the relative rarity with which the banned guns were used in crime before the ban … the maximum potential effect of the ban on gun violence outcomes would be very small…”

In wasn’t just the NRC, but the Centers for Disease Control and Prevention and the United States Department of Justice National Institute of Justice had similar findings upon researching the efficacy of the ban, in particular, the CDC found, “insufficient evidence to determine the effectiveness of any of the firearms laws reviewed for preventing violence.”

This is a stubborn truth that many pro-gun control supporters have a tough time acknowledging.  Gun bans do not stop violent people from carrying out violent acts.

So, given this information, one has to agree with Mr. LaPierre when he concluded:

Most politicians have learned that difference, too. They know that if they stick their necks out to attack Second Amendment freedom, it can cost them dearly at the polls … and they know that the old, failed anti-freedom policies of the past just don’t work.