There is something oddly anachronistic about the derringer.  These traditionally double barreled pocket pistols are simple in their design, cumbersome to use, and not widely praised for their efficacy.  But they are certainly iconic.  And there are a number of companies, especially those associated with cowboy action shooting, that sell both firearms and nostalgia.

American Derringer is no different.  The Waco, Texas based company specializes in refined 19th century concealed carry guns.  The company was founded in 1980 by Robert Saunders, whose vision was to “make a high quality stainless steel derringer that would never rust.”

The original designs were based around an iconic symbol of Western folklore, the old .41 Remington rimfire derringer. 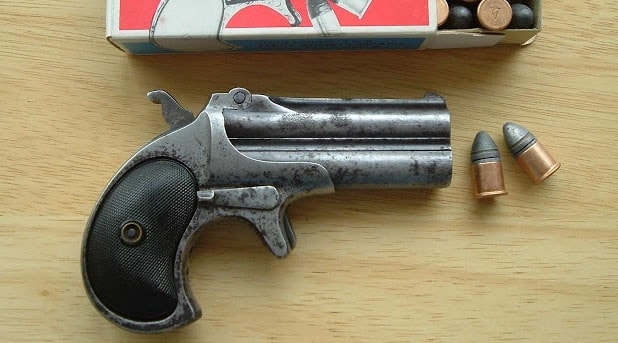 If we are to believe the mythologies, every woman west of the Pecos had one of these little Remingtons tucked up in the garter that held up her thigh-high fishnets.

It was Saunders’ goal to bring the iconic derringer design back into relevance, and he did so by combining the historical design with much more effective chamberings.  But even that wasn’t enough.

Saunders needed something else.  In 1986, he hired Elizabeth Bowen to assist with marketing and sales.  It was Bowen’s idea to bring back the feminine mystique of the derringer.  She pushed for a gun that could be effectively marketed to women who wanted to carry concealed handguns.  She referred to the the concept as the lady derringer.

Robert Saunders, recognizing something in Bowen’s idea, produced the gun, and made Elizabeth Bowen the company’s model.  The two were married soon after, and when Saunders passed in 1993, Elizabeth Saunders took control of the company. 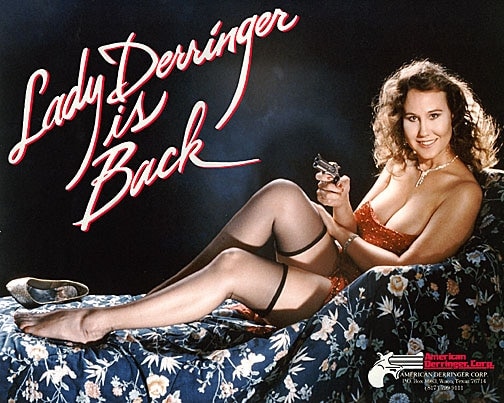 Since then Lady D, as she is known, has been at the helm of the Texas company, continuing to innovate (and that isn’t easy with something as decidedly antiquated as the derringer).  And she’s continued to model for the company.

But let’s talk about the guns.  The derringer is a bit of a relic, but that doesn’t mean it isn’t useful.  A derringer can be a reliable weapon, and ideal for certain concealed carry applications.  But these guns have a distinct 19th century flair to them, and that is hard to ignore. 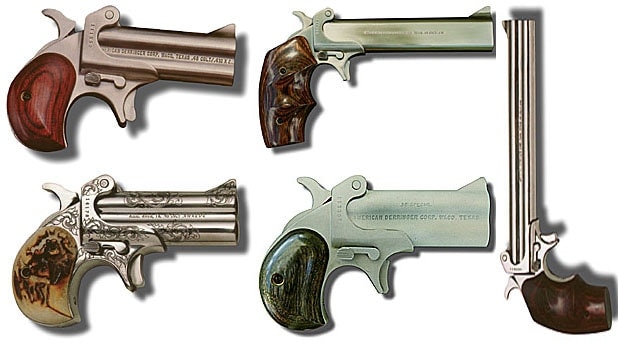 And they aren’t fun to shoot.  These are mechanically simple, break action breech-loaders.  There is not blowback action to eat up the recoil.  These guns don’t have the mass of even the smallest revolvers.  When you couple that with the two-finger grip common to most derringer designs, recoil becomes an issue.

The American Derringers do come with a manual hammer block safety.  While I’m philosophically opposed to safeties on guns designed for self defense, the American Derringer’s safety seems to be the best possible option.  The safety blocks the hammer.  That’s a no brainer.  But the safety is automatically disengaged when the hammer is cocked.  So there is no disengage-the-safety step to neglect.  Because the derringer’s trigger is exposed, no one carries one with the hammer already cocked, so there is no cocked-and-locked option. 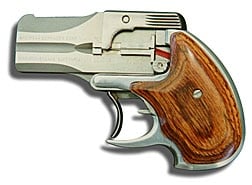 But American derringer does offer double action models.  This one is a .38, and the small extension of the grip frame helps to insure that the trigger, which is much more substantial than the little nubbin triggers on most single action derringers, won’t be accidentally pulled.

I’m not going to endorse this gun, at all.  While the compact design is nice, I can’t vouch for the safe carry of any double action gun that doesn’t have a full trigger guard.  The trigger pull would have to be very heavy to insure against accidental discharge, and that weight would really impede the gun’s function.

But it exists.  And I’d certainly like to test one and see if there are any practical limitations. 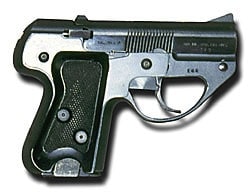 American Derringer has been branching out.  When most of us think about derringers, we see the old over under design with the super short barrels.  But there are other options.  American Derringer has slab sided derringers that will fire .410 shot-shells, target derringers, and even a couple of semi-automatic guns that look much more like the 20th century than the 19th.  Their .45ACP Simmerling is about as small as a .45ACP gets.

That’s not all the company offers.  Saunders plans on continuing with the derringers.  There is a four barrel .357 in the works.  And she’s branching out with more automatics.  There are plans for a .25, .32, and .380.

Looking for something more?  A necktie for example, or maybe some “parfum?”

I’m not sure what parfum is.  But you can also get a poster or two of Lady Derringer, “suitable for framing.”  You can get them autographed, if’n you’d like.  Or just pick up a derringer.  They are well made, and fun.

Can the derringer be a relevant platform for contemporary shooters?  I think so.  We’re all still waiting on the Double Tap.   Until then, we have some great guns to work with.