Our Neighbors to the North have a simple message for us regarding our guns: either leave them at home or declare them when you’re crossing the border into Canada.

According to numbers released by the Canada Border Services Agency, there has been a spike in the number of firearms – specifically those that are prohibited or restricted under the Canadian Firearms Act – being seized at the border by agents.

Officials say that while some of these weapons are being smuggled by traffickers working for organized crime syndicates, the majority of seized guns belong to law-abiding Americans who seem to be unaware that their 2nd Amendment rights do not extend into Canada.

“It’s why crossings in Southern Ontario, for example, are so busy with firearm seizures, Jason McMichael, first national vice-president of the Customs and Immigration Union, told the Calgary Herald.

“It’s such a part of their life to carry this arm that when they cross the border, they can’t imagine being here in Canada without it, so often they don’t declare it and it ends up being found and therefore seized,” McMichael concluded.

The figures suggest that 2012 could be a record year for gun seizures, perhaps eclipsing the highest year for which complete records are available, 2007, when a total of 584 guns were confiscated.

During the first six months of 2012 border guards nabbed a total of 247 firearms.  That number is likely to rise significantly officials say, especially given the fact the numbers for July and August have not yet been tabulated, July and August are considered the “busy season” for weapon seizures. 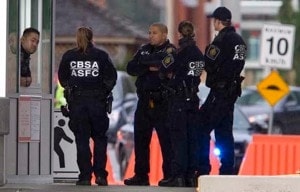 A CBSA spokeswoman explained that a “large percentage” of firearms confiscated in the Pacific region were coming to or from Alaska.  She urged travelers to be mindful of Canadian gun laws.

“The CBSA places a high priority on the detection and interdiction of undeclared firearms and prohibited weapons,” CBSA spokeswoman Esme Bailey said.

“Canadian firearms laws are clear. All travelers must declare any firearms and weapons in their possession when they enter Canada. Anyone who does not declare them upon arrival can be charged (with) the smuggling or trafficking of firearms into Canada.”

So, if you’re traveling into Canada, what should you be wary of?

Well, for starters, definitions are important.  According to the Canadian Firearms Act, there are three classes of guns, non-restricted (ordinary shotguns and rifles), restricted (essentially handguns) and prohibited (fully automatics, converted automatics, handguns with a barrel length of 105 mm (approx. 4″) or less, and .25 or .32 caliber handguns among others).

Under no exception can you bring a prohibited firearm into Canada.  You can bring a restricted firearm or handgun into Canada, but you need to obtain an Authorization to Transport from a provincial or territorial Chief Firearms Officer).  Officials do not issue ATTs for hunting or self-defense.

To bring non-restricted guns across the border, there’s a $50 fee involved and a Non-resident Firearms form in triplicate that has to be confirmed by a customs officer upon entry.

In all cases you have to be 18-years or older to transport guns across the border.  For more info on how to bring firearms into Canada, check out the following links here or here.