As a die-hard Buffalo Bills fan there’s nothing I look forward to more than the start of Hockey Season.

Yes, after having my heart ripped out and stomped on every Sunday by Tom Brady or the JETs or whoever it is that the Bills are playing, I need a reprieve, and what better way to restore my sanity than by watching my beloved Buffalo Sabres, a somewhat competitive and semi-relevant NHL franchise.

If you’re not a sports fan or if you’re not following my logic, it’s real simple: the Bills are so terrible that if I didn’t have the Sabres to pull me through the highs and lows (mostly, gut-wrenching lows) of football season I’d go insane. 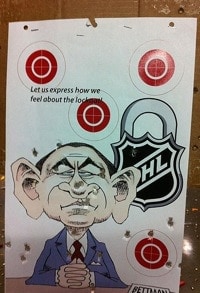 Now, don’t get me wrong, it’s not that I don’t love the Sabres in their own right, I do (you’ll notice that my avatar is a picture of Winston wearing a Sabres t-shirt), but the point is they serve a critical function beyond the entertainment they provide on the ice.  That is, they give Buffalo sports fans hope.  Hope that one day the city will win a championship and it will make up for all the heartbreak we’ve experienced over the years (Four back-to-back Super Bowl losses, one which included “Wide Right,” not to mention “No Goal,” or the “Music City Miracle,”)

Okay, that’s probably enough insight into the psychology of a Buffalo sports fan and this long-winded intro is really just to say that there is NO HOCKEY RIGHT NOW!  The NHL is currently experiencing a lock out (aka a work stoppage due to a labor dispute)!

So if Hockey means this much to me and the city of Buffalo, one can only imagine what it means to those who live it and breathe it, 24-7, 365 days/year, i.e. Canadians.

Unsurprisingly, the 50-day lock out has them going crazy too.  One way they’ve decided to channel their ire and disappointment and angst is by going to a local gun range and shooting paper targets of NHL Commissioner Gary Betman, undoubtedly the most controversial figure in this whole mess.

Wes Yen, the manager of a DVC Indoor Shooting Center in Port Coquitlam, British Columbia, spoke to Puck Daddy, a Yahoo Hockey blog, about this phenomenon.

“It seems to be one of our more popular targets. It’s actually been a pretty big hit for us,” said Yen.  “He probably equals the zombie targets that we sell.”

Though, of course, this raises questions about decency, taste, civility, etc.  For example, despite how angry and upset someone is, is it ever really appropriate to fire bullets at a public figure such as Bettman?  While he may be avaricious, narrow-minded and public enemy number one, he is not an evil person.  He is not bin Laden, who certainly warranted a few shots to the head.

Yen was asked about whether he had reservations about the Bettman target, which has a cartoonish image of the commish, replete with Dumbo-like ears, an NHL logo made into a lock and a caption that reads, “Let’s express how we feel about the lockout!”

“I guess not. It’s an animated target. We’re not using real people. Everyone knows it’s just for fun,” he said.

Does everyone really know it’s just for fun?

A quick search on Twitter reveals some explicit and unsettling remarks:

In truth, most people know that the Bettman target practice is just for fun, perhaps a way venting, a tasteless gag, etc., but it’s also possible (especially, given those tweets) that not everyone knows where to draw the line.

With that said, what are your thoughts?  Is shooting Gary Bettman targets at the local range all in good fun?  Or is it a situation that’s asking for trouble?