On Monday, the two lawmakers spearheading the probe into Operation Fast and Furious released their second installment of a three-part report on the failed gunwalking program.

The 104-page Joint Staff Report, entitled “Fast and Furious: Anatomy of a Failed Operation Part II of III,” closely examined the Justice Department’s role in the operation; whereas Part I looked at the ATF’s failures and shortcomings.  (Part III will examine the DOJ’s stonewalling, in particular, Attorney General Eric Holder’s refusal to comply with the requests of congressional investigators.)

In short, the saga continues.  The real question is, did the authors of the report, Rep. Darrell Issa and Sen. Chuck Grassley, tell us anything we didn’t already know about the operation?

Well, no, not really.  At the end of the day, the Justice Department screwed up and as the report correctly concludes, the DOJ “failed the American people with the Fast and Furious scandal.  It failed to enforce the law, to ensure public safety, to provide leadership, to halt the operation, and to hold accountable those responsible for their conduct in conjunction with this deadly and disastrous operation.”

What it does provide the public and the media is a more substantive look at the players behind the scenes at the DOJ, highlighting their critical errors and lack of oversight while the operation was in full swing. 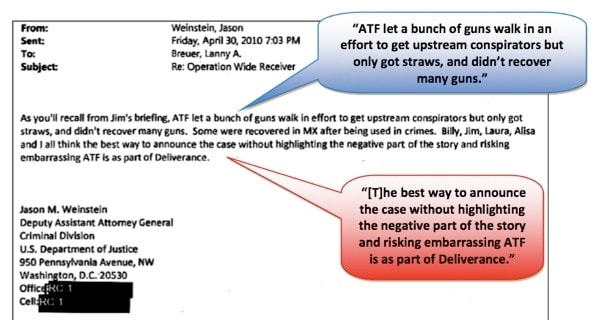 It also accused Department officials of having a “pass-the-buck” attitude when the congressional inquiry started in earnest.

“Every senior Department official interviewed during the Committees’ investigation claimed either ignorance of Fast and Furious or that it was someone else’s responsibility to ask questions or draw connections,” the report said.

While Holder’s name was mentioned throughout the report, it was clear he wasn’t the primary focus.  Again, it appears Issa and Grassley are waiting to really skewer him in the final installment, Part III.

As for recommendations and corrective actions, the report is not as forceful as it needed to be.  It should have literally called for “heads to roll,” as in the removal of specific individuals from their positions within the Department, instead it called for a more general change in the “management culture.”

“Thus far, the department has failed to reprimand any senior department officials for their actions — or lack thereof — during Fast and Furious,” the report says. “In fact, several have received promotions. The management culture of the department must change to prevent such a deadly operation from occurring again. Time is of the essence. Change must begin now.” 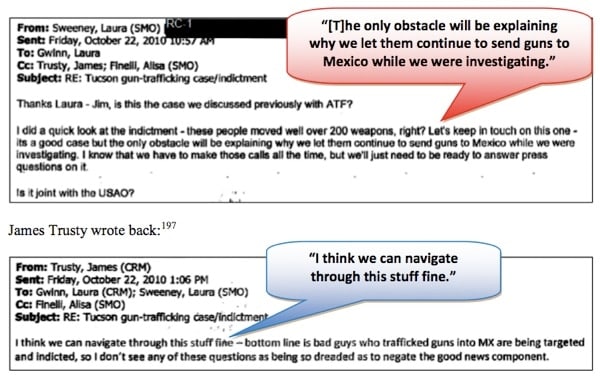 In a press release, both Issa and Grassley spoke to this point of little or no accountability amongst senior DOJ officials.

“Officials in the Justice Department saw any number of warnings and some even had the gunwalking information right in front of them, yet nothing was done to stop it.  Countless people may be murdered with these weapons, yet the Attorney General appears to be letting his employees slide by with little to no accountability,” said Grassley.

“The Attorney General needs to make changes to ensure that department leadership provides oversight of the agencies they are tasked with supervising, instead of pointing fingers at somebody else,” added Grassley.

While one has to certainly respect and applaud Rep. Issa and Sen. Grassley’s investigative efforts on Operation Fast and Furious, someone should inform them that if they wait for the DOJ to police itself, they might be waiting around for a very long time.

Following the publication of the third report, it may be wise for lawmakers to start proposing ways in which they can take real action against DOJ leadership, especially if nothing changes between now and then.

Here is a recap of the report’s highlights, courtesy of the Issa/Grassley press release:

•    A detailed account of the interview with former ATF Acting Director Kenneth Melson.

•    The Obama Administration’s new focus on trafficking and targeting of drug cartels, which led to the strategy behind Operation Fast and Furious.

•    Deputy Chief of Staff to the Attorney General Monty Wilkinson discussed Attorney General Holder participating in the press conference announcing the take-down of Operation Fast and Furious prior to the death of Border Patrol Agent Brian Terry.

•    Both Monty Wilkinson and Gary Grindler were informed about the connection between Operation Fast and Furious and U.S. Border Patrol Agent Brian Terry’s murder.  Grindler received detailed information about the connection.  He took no additional action, however, to properly supervise the operation.

•    Recommendations for future management of DOJ.