Tactical Life has some pretty juicy photos of what must be a new SIG Sauer submachine gun. This pistol-caliber SMG takes a deep draught from the AR pool, but looks scaled-down in front of the fire control group to take advantage of the smaller cartridge and lessened bolt travel.

From these photos we’re going to assume for now that it uses standard AR trigger parts and pistol grips, and it appears to come with a Magpul MOE-K pistol grip for short buttstocks. They’re showing off two different buttstock designs, one tubular side-folder and one telescopic stock similar to many Heckler and Koch SMGs. 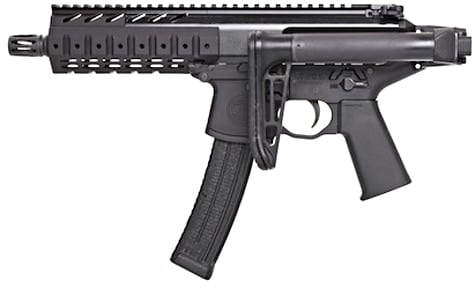 Along with the photos is a rumor that this is a gas piston-operated gun, not blowback like many similar designs. That will dramatically cut fouling and spent powder to the face, especially when running the gun suppressed.

The rears of both the upper and lower receivers are extended and both buttstock designs have a short fixed portion as well, suggesting that they accommodate a buffer tube. Combined with an adjustable gas system, it could be very easy to tune the firing rate on this gun. We’ll have to wait and see, though.

Tactical Life shows the SMG with both short and long barrels as well as short and long hanguards, but all the models are machine guns and not for the commercial market. Although SIG does sell SBRs to the public, it would warm the cockles to see a pistol carbine model that you could pick up right away. 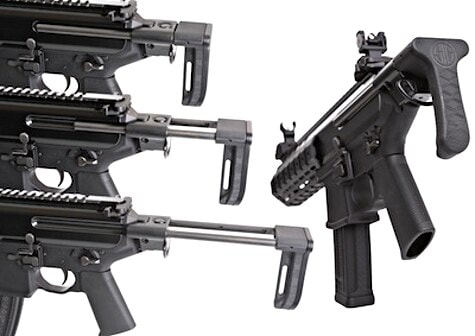 This isn’t the first big SMG rumor lately, as word is that Izhmash is planning to develop a semi-automatic carbine version of their Vityaz, a 9mm AK-style submachine gun, and sell it under the Saiga brand. Obviously these target different markets, but both are good news for pistol-caliber carbine lovers.

If you just can’t wait for SIG to officially announce their SMG and develop and sell a commercial variant to the general public, you should probably know about Double Diamond Law Enforcement Supply.

They’re pistol-caliber AR experts, and they make several different types of custom AR lowers designed to accept Colt SMG or Glock magazines in 9mm, .40 S&W, .357 SIG and .45 ACP. They make both carbine and SBR or pistol-length uppers for whatever build you may desire.

Depending on how you build your Double Diamond gun, expect to drop between $1,000 and $1,500. Something tells us you won’t spend less waiting for the SIG. The Saiga, on the other hand, might be a bit different…