Calling it a “compromise,” Cook County Board President Toni Preckwinkle announced Wednesday morning that she would nix plans to tax ammunition a nickel-per-bullet in 2013, but would go ahead with the $25-per-gun tax on the purchase of firearms for county residents.

The tax on guns, which is expected to generate as much as $600,000 in 2013, is part of a $2 million violence prevention package that is designed to address the county’s exploding homicide rate (already, Chicago has eclipsed last year’s record, notching its 436th homicide this week).

She added that there was “difficulty” with the ammunition tax proposal because in some cases it would have been greater than the price tag on the box of ammo.  However, she didn’t rule out the idea of reintroducing the bullet tax in the future. 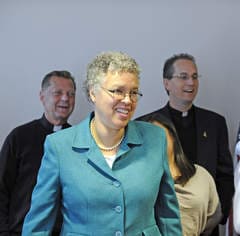 According to Preckwinkle, an advisory committee will oversee the $2 million violence prevention fund, doling out money as it sees fit to non-profit organizations with “proven experience in violence prevention or community outreach.”  A portion of the funds, as much as $100,000, will be used to ramp up efforts to detect and deter straw purchasers.

“This money will provide needed resources to organizations on the front lines that deal with the impact of violence in their communities on a daily basis. It is critical that we do all we can to reduce violence, keep illegal guns off the street and deter criminal behavior,” President Preckwinkle explained.

“This proposal is the result of discussions and negotiations over the past several days and I’m proud of our efforts to build consensus and work together throughout the 2013 Budget process,” she concluded.

Since Cook County is currently facing a $115 million budget shortfall, it’s hard to imagine that it has an extra $2 million to spend on violence prevention efforts, even with the $600,000 it stands to make from taxing gun sales (the bullet tax would have brought in approximately $400,000 in revenue).

However, Preckwinkle is prepared to address the budged gap by cutting spending on consultants in the health and hospital system and imposing taxes on merchandise purchased outside of the county (the “use tax”), on slot machines and video gambling machines at a local casino as well as a buck-a-pack tax on cigarettes, among others (for more on this, check out this article in the Chicago Sun Times).

Given all of this, what do you think of Preckwinkle’s budget proposal?  Also, do you believe her violence prevention fund will be effective?  Is it a good use of taxpayer dollars?