Super Storm Sandy came, it saw, and it conquered, leaving in its wake a new threat in and around New York City.

The Huffington Post has already published several articles detailing the exploits of these post-storm thieves.

One story involves workers at Mega Aid Pharmacy in Brooklyn, who were dejected after a band of looters had broken into the store and rifled through more than 10,000 pharmaceutical items, stealing mainly prescription drugs.

“The water went away and these people started walking down the streets and just robbed stores,” an anonymous worker told HuffPost Crime.

Along with his manager, 27-year-old Stan Gutkin, the worker sifted through the wreckage looking for anything that was salvageable. 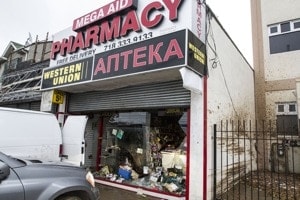 In Toms River, N.J., it was a similar scene.  Local resident Pat Shields commented on the stressful situation.

“People are just walking into people’s yards and taking stuff,” 53-year-old Shields told Huffpo. “This is a crime scene. It’s a catastrophe.”

In Ocean Towers, where the power had gone out, people were beginning to riot according to one onlooker.

“People are turning on each other — they’re attacking each other,” 39-year-old Dena Wells told Huffpo. “Even when there’s no disaster, this building is disastrous. But after the hurricane, it just got crazy.

Police in the area acknowledged the danger and told residents that they would step up patrols and community surveillance.

“It’s getting dark, and it’s real dangerous out here — that’s why there’s a cop on every block,” one NYPD officer told HuffPost Crime.  Even so, “You could get your stuff stolen.”

In response to these stories, Second Amendment Foundation Executive Vice President Alan Gottlieb pointed out what is obvious to most gun owners.  That is, given New York and New Jersey’s stringent gun laws, many residents are defenseless against looters.

“So many shopkeepers are defenseless to stop this [looting], thanks to the anti-gun policies of Mayor Michael Bloomberg, said Gottlieb in a press release.  “After this, should anyone wonder why we are suing Bloomberg and the City of New York over their handgun permitting process?”

“People should be able to protect their lives and livelihoods,” Gottlieb observed, “especially in the wake of a natural disaster. Despite one report that there is a New York cop stationed on every block, business owners must have the means to defend what’s theirs.”

Gottlieb noted that while it is important for Americans to help with relief efforts in any manner they can, it is also critical for us to “hold Bloomberg and his cronies, and their counterparts in New Jersey, partly accountable for losses to looters because business and property owners have been continually deprived of the means to discourage or stop looters.”

“People have lost a lot,” he concluded. “They should not lose what’s left because of regressive anti-gun laws that have been perpetuated by Bloomberg and others to keep them defenseless.”

Gottlieb’s comments raise an interesting question, who should shoulder the blame for this situation?  Obviously, the majority of it lies with the criminals, but is there an element of personal choice involved?

Don’t a lot of residents choose to live there, knowing full well that the NYC and the surrounding areas are not gun friendly (it’s virtually impossible to get a concealed weapons permit)?

Or is it mainly the fault of the pro-gun control tyrant Mayor Michael Bloomberg that many citizens are defenseless?

Also, given your location (wherever that may be), have you thought about how you would deal with looters in the aftermath of a natural disaster?