Share
You always hear stories of people pulling guns on bank tellers, but what about the other way around? When was the last time that you heard of a bank manager holding a bank robber at gun point? Peoples Bank & Trust President David W. Thompson of St. Louis, Missouri, turned the tables on a gun-toting thief with a weapon of his own.

The St. Louis Post-Dispatch reported that it started the same way that most robberies start: a masked-man walked into a bank, held up the place, and then walked out with a bag full of loot. He should have known better – in order to get in, he had to pass a sign explaining that the bank was a concealed carry-approved establishment. The official policy of the bank explains, “Management recognizes the Second Amendment to the U.S. Constitution as an unalienable right of all citizens.”

The robbery went off without a hitch, but Thompson wasn’t about to let 58-year-old Donald Ray Lee, who wore the Chucky mask from the film “Child’s Play”, just waltz out of his bank with a bag full of other peoples’ cash. He grabbed his Colt .380 handgun and went out into the parking lot to confront Lee, locking the door behind him. Once he was certain that there would be no collateral damage, he pointed his gun at Lee and said, “Sir, get out of the truck. You’re not going anywhere.” 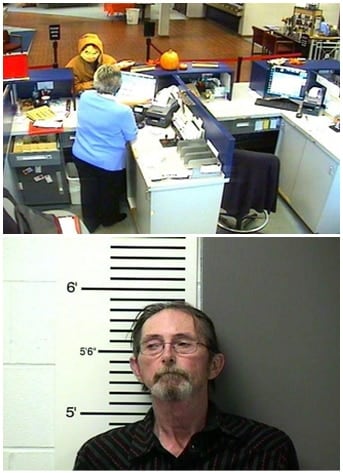 The man put his hand in his pocket as if he had a gun, but Thompson warned, “You don’t want to go there. This will end badly.” He sounds cool as a cucumber, which Thompson explained was a product of the adrenaline: “I didn’t have time to get scared. I was excited. Your adrenaline pumps. He robbed a bank, he menaced my employees, and I don’t allow that.”

It turns out that it was all a bluff. The robber did not have a weapon of his own, so it was a piece of cake holding him until the cops showed up. They charged Lee with first-degree robbery in a bank heist and set his bail at a cool $50k.

Lee told the police that he had only gone to the bank to trick-or-treat. Maybe he never got the memo that Halloween is all about getting candy from strangers, not about nabbing about $5,000 in bank notes.

You always hear the pro-gun control argument that the world would be a lot safer if citizens could carry concealed weapons during their day-to-day lives. Well, this is clearly one case that supports that position. Thompson isn’t a bad guy, he’s just an average joe who also happens to have a concealed carry permit, a lifetime membership with the NRA, and a black-belt. It seems like Lee might have picked one of the worst banks in America to rob.