LaserLyte has just developed an interesting new close-quarters laser sight that’s designed with shotguns in mind. While it will work on any firearm with about three inches of uninhabited rail, this sight, called the Kryptonite Center Mass laser, or CM-15, projects an array of green light laser dots to simulate the spread of buckshot from a combat shotgun.

The Center Mass laser sight shines one green dot at the center of the array which is surrounded by eight more dots to form a ring. The ring spreads about one inch every yard, which is perfect for shorter-barreled or cylinder bore shotguns, which is to say, shotguns typical for self-defense, law enforcement and military service. 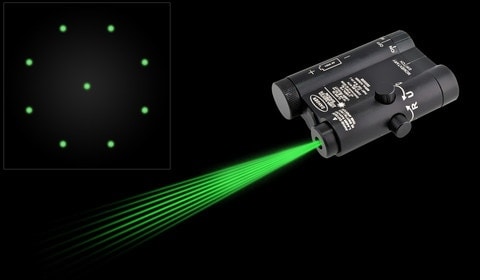 This “military-styled” laser—it looks a bit like an AN/PEQ target pointer—is constructed from 6061 T3 type II hard-anodized aluminum, so it’s designed with abuse in mind, and has a three-way power switch for off, constant and momentary on. It can also be used with a remote switch, a 2-inch strip with a 10-inch braided copper cable.

The CM-15 runs off one CR123 battery and has a 6-hour runtime. It weighs 5.4 ounces and measures 3 inches long by 2.4 inches wide by 1.4 inches tall. Naturally it mounts to Picatinny rails and has easy-to-adjust knobs for widage and elevation.

Most shooters are familiar with the misconception that “You don’t have to aim shotguns,” and that not only must you aim them, the type of load and amount of barrel and choke you use all greatly affects shot pattern, and that in some ways, shotguns are more difficult to use that rifles.

While the CM-15 can’t be tuned precisely to match your shotgun’s pattern, the 1-inch-per-yard spread, with its center dot, will give you a very good idea about where your shot will wind up. And because it’s a laser sight, it doesn’t matter if you’re shooting with both eyes open as it doesn’t matter if you’ve even got a real sight picture. You just literally light up your target and pull the trigger.

With its nine green light points, the CM-15 is going to be even more noticeable than a standard green light laser. The added brightness and rate of acquisition that this sight can provide is likely to appeal to non-shotgunners, too. Provided you’re not going to be shooting very far, the large footprint of this laser sight will no doubt make getting on-target with a rifle or submachine gun that much easier, too.

The Center Mass laser is priced very nicely as well, with an MSRP of $285. If you’re looking to kick ass and chew bubblegum, but would rather spend your bubblegum money on a shotgun laser sight, check out LaserLyte’s new CM-15.