If you’re unfamiliar with the survey tracker report, it is the product of a monitoring service (called the “survey tracker”) that keeps tabs on an online panel of active hunters and shooters.

The information gathered from this panel is used to gauge industry trends that inform gun owners as to what products a sample group of consumers are purchasing on a monthly and yearly basis.

In July-August 2012, for example, of the firearms purchased by hunters and shooters who were polled, 46.6 percent were handguns, 44.9 percent were rifles, 21.4 percent were shotguns, and 5.8 percent were muzzleloaders, according to the report (see explanation on chart for why percentages do not equal 100 percent).

With respect to rifle ammo, Remington has the greatest market share among those surveyed with 25.5 percent; Federal comes in second with 18 percent and Winchester in third with 17.3 percent.  As for top knife brands, it goes Buck with 19.1 percent, Gerber with 13.2 percent and Kershaw with 5.7 percent.

Additionally, the survey tracker includes a “Question of the Month,” a specific inquiry about an aspect of the lifestyle of hunters, shooters, gun owners.

This months question had to do with membership to gun ranges and shooting clubs.   According to the findings, roughly 31 percent of those surveyed in 2012 belonged to a shooting range or sporting clays club.  That number is actually up around 5 percent from the 2011 figure, which found only 26 percent belonging to gun clubs.

For those who answered “yes” to the question, they were asked additional questions about improvements, if any, they’d like to see made at their range/gun club.  A fair portion, around 44 percent, was content with the way their club was in 2012. 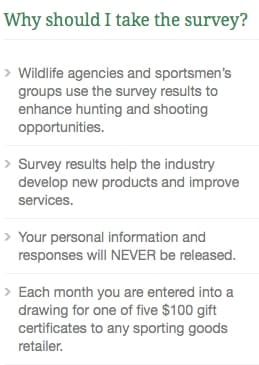 As you can see, there’s a lot of information here.  And really, it’s just the tip of the iceberg.  For those who want more in-depth or more detailed reports (on extensive brand market share, percentages of purchases per retail outlet, sales by price point, target shooting activities, species hunted, demographics) they are available on a subscription basis.

Now remember, this is a survey of a specific group of individuals, the results do not represent total industry performance.  Nevertheless, it’s a good overall indicator of what’s popular and can be useful in a number of different ways, specifically for those of us who are curious and who like to keep an eye out for what’s going on in the gun community.

Of course, you can also take the survey yourself and provide your own feedback to the questions.  When you do take the survey, “you’re entered into a drawing for one of five $100 gift certificates to any sporting goods retailer.”

In any event, seems like a reasonable deal, fill out the survey and maybe win a few bucks.

Do any of you participate in the survey tracker process?  If so, please provide your feedback and thoughts below (ironically, we’re now surveying those who’ve been surveyed).