I am by no means an anarchist, but I find myself frustrated sometimes by the ludicrous and inscrutable laws that govern firearm ownership.  My uncle, for example, has an ancient single shot .410 pistol that he has owned since before the 1930s National Firearms Act (NFA).  Before the NFA, it was a useful tool that a mailman carried in rural Alabama, where there are ugly snakes.  Now it is a short barreled shotgun.

And if I wanted the same level of protection, I’d have to carry something like a Taurus Judge, which shoots the same .410 shot shells, but is legal.

This always leaves me scratching my head.  But the fun has just begun.  Because I’ve fallen in love with the AK-47.

There is no one set of regulations that make understanding firearms laws easy.  Instead, pieces of various legal code overlap.  The NFA had a major update in 1968, for example.  And part of that set of rules limited what could be legally imported, and by whom.  The 1968 regulations stipulated that imported weapons must have “sporting” applications. 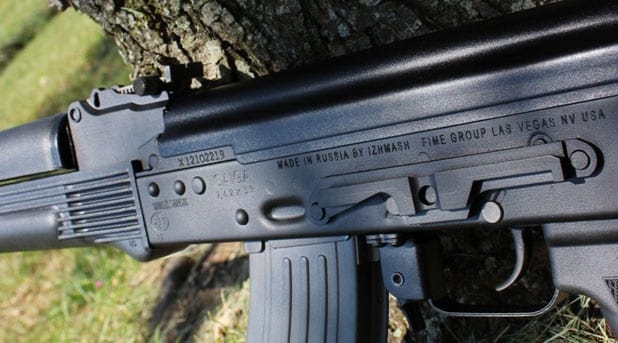 Sporting.  The meaning of this abstraction have been hotly debated ever since.  Practical applications seem to exclude the importation of many martial arms, especially automatics guns, assault rifles, machine guns, and other destructive devices.  I’m summarizing.  Wildly.

But I’m coming to my point.

K-var recently sent me an SGL21-61 to review.  This gun was built in Russia as a “sporterized” rifle, which makes its import legal.  Arsenal, who imported it, took apart the sporterized version and rebuilt the assault rifle version, which was then sent to K-Var.

If that doesn’t seem strange, consider this.  Some overseas exporters will take existing, surplus AKs and sporterize them, just to meet our import expectations.  And then we put change them back.

And in order to make these butchered imported guns legal, they must be rebuilt with a certain number of specific US made parts. 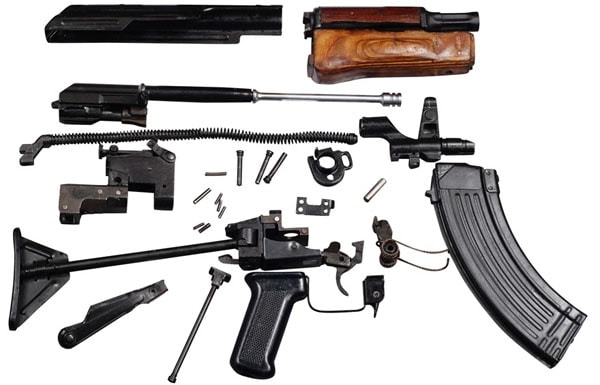 Or the exporters will remove all of the parts, cut the barrel, cut the receiver in half, dump all of the parts in a box with a bunch of Cosmolene and send it our way like that.  The above kit is an example from Midway USA. The sporterized guns make solid rifles.  The parts kits guns are more risky, but the rebuilt guns have more authentic history.

Why all of the fuss?

AK enthusiasts often refer to 922(r) regulations.  This is the most concise set of rules used to determine if an imported weapon is legal or not.  There are several elements that are to be assumed.  The barrel has to be of legal length.  The weapon must not be an automatic.  There are also specific state regulations that must be met.  But assuming the gun passes muster on all of these other fronts, we can then talk about 922(r).

The short-and-sweet version of 922(r) says that a rebuilt assault rifle must have ten specific parts (from an available list of twenty such parts) that are made in the US.  The list is in the legal mumbo-jumbo below.  This gets a bit technical, but it is worth reading.

(1) the assembly of any such rifle or shotgun for sale or distribution by a licensed manufacturer to the United States or any department or agency thereof or to any State or any department, agency, or political subdivision thereof; or

(2) the assembly of any such rifle or shotgun for the purposes of testing or experimentation authorized by the Attorney General.

(a) No person shall assemble a semiautomatic rifle or any shotgun using more than 10 of the imported parts listed in paragraph (c) of this section if the assembled firearm is prohibited from importation under section 925(d)(3) as not being particularly suitable for or readily adaptable to sporting purposes.

(b) The provisions of this section shall not apply to:

(1) The assembly of such rifle or shotgun for sale or distribution by a licensed manufacturer to the United States or any department or agency thereof or to any State or any department, agency, or political subdivision thereof; or

(2) The assembly of such rifle or shotgun for the purposes of testing or experimentation authorized by the Director under the provisions of Sec. 178.151; or

(3) The repair of any rifle or shotgun which had been imported into or assembled in the United States prior to November 30, 1990, or the replacement of any part of such firearm.

(c) For purposes of this section, the term imported parts are:

Odds are, if you are buying a new imported assault rifle, the seller will make sure the weapon is 922(r) compliant.  There is nothing for you to worry with, unless you intend to replace parts.  If you do, you must make sure that ten of these parts (from the list above, mind you) are made in the US.  And watch the magazines.  Three pieces of a magazine need to be marked as US made.  Imported surplus magazines can make a legal rifle illegal, with the speed of a magazine change (assuming that those three US made parts were part of the ten).

But remember this; these are potentially consequential legal matters.  Don’t trust everything you read on the web.  There are some good places to look for advice, like the companies who specialize in 922(r) compliance: Arsenal, K-Var, or Tapco.  But none of these sources replace good legal counsel.  If you want even more, check out this site.

In the end, the rifle you end up with will be worth all of the hassle.   But educate yourself.