Wilson Combat is a name synonymous with custom 1911s.  Their pistol line is very well respected, but that’s not all they do. They’re developing a solid reputation as a purveyor of tactical shotguns.

For more than ten years, Wilson Combat has been running Scattergun Technologies, a branch of Wilson Combat that takes Remington 870 shotguns and improves them.  Not easy with an 870 — they start off as solid shotguns.  They replace a good bit of these guns — springs, trigger groups, slides and stocks — then they add the extras.  The results are even more reliable, more functional 870s.

Rebuilding new 870s is simple enough.  The guns are relatively easy to modify.  But what about those old rust-bucket 870s?  What can be done with some of these ancient shotguns that seem so far gone?  Wilson has an answer there, too.  They call their new program Remginton Steal. 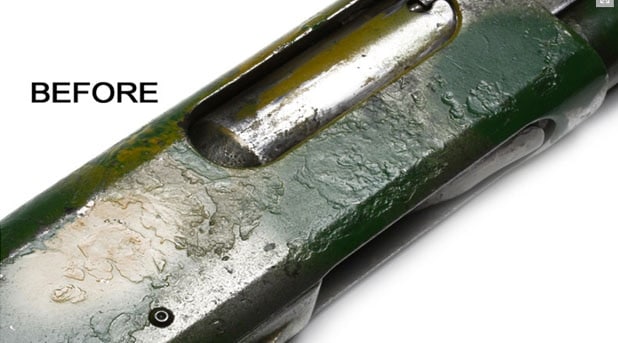 Their latest shotgun project involves rebuilding your old 870.  The pictures below will illustrate what’s possible.  But the philosophy is simple.  The 870 is a durable weapon.  As there are more than ten million of them out there, the 870 is easy to find.  Many of these guns have been used hard.  Their finish is shot to hell.  Their springs are sprung.  But the steel is sound, and the guns are safe to shoot. 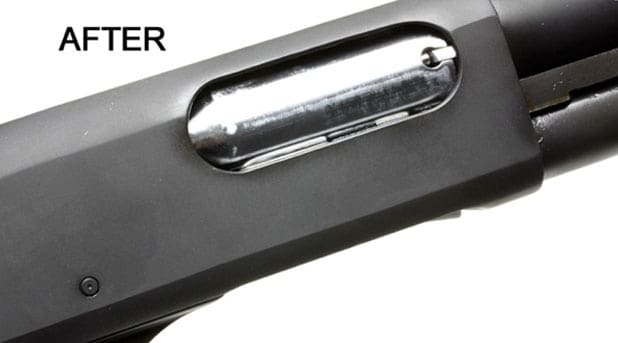 The old 870s don’t have to be scrapped.  They may not have any collector value, but they can still be useful guns.  Wilson Combat’s new program takes these old zombie guns and gives them new life.

What do they actually do?

Based on the photos from Wilson Combat’s site, they do just about everything.  They do the impossible.  They work scatter-gun miracles. 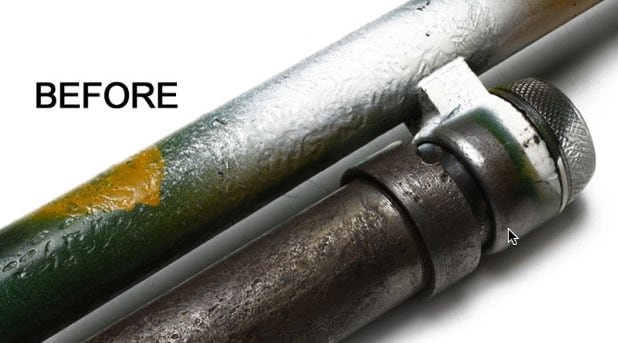 Check out the extensive pitting on this gun.  The odd puke-and-green paint makes it look even more zombie like.  But the after picture is absolutely amazing.  It appears that the barrel has been replaces.  The magazine tube has been buffed, a lot, and there are still traces of the former state of the gun. 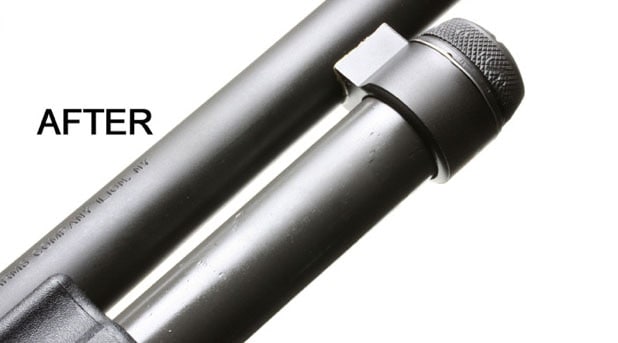 The smiths at Wilson will repair what can be repaired, replace what can’t be repaired, and will upgrade the rest.  If anything is damaged, it will be scrapped, too.

The upgrades are similar to what they already do on their custom and semi custom 870s.  They install new buttstocks, and fore grips, new springs and followers.  They upgrade the controls, and triggers.  They strip all of the external parts and Parkerize them.  But they will also convert the chamber to accept three inch shells.  If it is early enough, the shell feed will be converted to the newer Flexi-Tab Anti Jam System.

The end results look completely different.  And once back from the dead, the new gun will run like a dream.

I realize that this is what restoration artists do.  There are many small craftsmen who specialize in this sort of work.  On a larger scale, there are companies like Turnbull that specialize in high-class resurrections of antiques.  But this is the first program like this that I’ve come across.  What Wilson Combat is doing is taking old guns and giving them new life.  It is a testament to the quality of the Remington 870.  Wilson Combat makes great guns.  But when they make, or remake, shotguns, they reach for something that already works.

What does it cost?  It depends on how many miracles they have to perform. But it starts off below the price of a new 870.  The base price for the upgrade is a steal: $229.95.