Should law-abiding Illinois residents be allowed to carry concealed firearms?

This question will be appearing on ballots this Tuesday in as many as nine Illinois counties (Adams, McDonough, Stephenson, Warren, Winnebago, Rock Island, Mercer, Henry, among others).

Though the vote on concealed carry is a non-binding advisory referendum, pro-gun advocates say it will allow voters to send a clear message to pro-gun control lawmakers around the state, i.e. ‘It’s time to legalize concealed carry!’

“Illinois is the only state in the union that denies its citizens the right to carry concealed firearms,” Valinda Rowe, a spokeswoman for illinoiscarry.com, told the Quad City Times.

Rowe spoke about the uphill battle gun owners face in the Land of Lincoln, noting how it will take a super majority in the General Assembly (approval from three-fifths of the state House and Senate) to pass a concealed carry bill.

“The reason we need a super majority is that Governor (Pat) Quinn has vowed to veto a concealed-carry law,” she said. 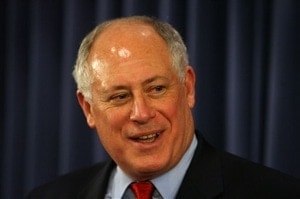 Indeed.  Gov. Quinn and Chicago Mayor Rahm Emanuel have both opposed concealed carry legislation while, at the same time, pushing for tougher gun laws (this year, Emanuel called for a statewide handgun registry as part of a public safety initiative).

Offering a brief explanation as to why Gov. Quinn opposes concealed carry, Brooke Anderson, a Quinn spokeswoman told the Associated Press, “We don’t want situations when people can pull out weapons at their local grocery store, sports stadium or shopping mall.”

Despite the interminable resistance from state and city leaders on this issue, gun owners have a reason to be optimistic.

“We’re only two votes away from a super majority,” Rowe said.

That gap may even grow tighter because both candidates in the race for Illinois’ 15th Congressional District, Republican Rodney Davis and Democrat David Gill, support concealed carry.

It would appear that slowly but surely more lawmakers are beginning to recognize how important self-defense rights are to the majority of Illinoisans.

However, there will always be those standing in the way of progress.

“More guns on the streets will not make us safer,” said Colleen Daley of the Illinois Council Against Handgun Violence. “We recognized law-abiding gun owners’ rights, we recognize the Second Amendment. We’re not trying to take guns away, we never have.”