Almost 20 years ago, I spent some time in Alaska.  I was in Sitka with a group of volunteers working on a church and a school.  After work each day, I wandered around on the island.  I grew up in the woods, so I wasn’t intimidated by the Alaskan wilderness.

I had also spent some time with bears.  I had been spending summers in the mountains of New Mexico and had seen some really big black bears.  I knew their behaviors.  I’ve stood down false charges, and knew when it was safe to be aggressive and when it wasn’t.

Times have changed.  If I were headed out into bear country now, I’d be better prepared.

What to look for in predator protection

When I say predator, here, I mean brown bears.  Grizzlies.  Though there are other predators.  Black bears are usually much less dangerous to humans, but they can get aggressive.  A black sow with cubs demands respect.  Hogs, on the other hand, are feral vermin that should be shot on site, and smoked, pulled, soaked in a mixture of tomatoes, cayenne and apple-cider vinegar and eaten-up.

And then there are the bipedal predators, and these are the most common, unfortunately. 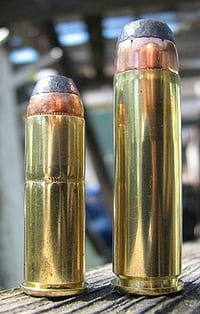 Twenty years ago, the sidearm of choice for defense against bears was the .44 magnum.  Guns like the Ruger Redhawk pictured above were reasonably common.

When considering a good predator gun, think big.  The brown bear can top out at 1,400 pounds.  That’s a bear six times my size.  That’s more than two Andre the Giants.

But bigger isn’t always better.  Spend any amount of time on Youtube watching folks shooting the .500 S&W, and you’ll see shooters who filch because they fear the inevitable and punishing recoil.  When you flinch, you sometimes miss.  No point in having a hand-canon if you can’t hit what you’re aiming at.

Here are the basics on three cartridges from  Hornady. They are similarly sized jacketed hollow points (the best option for two legged predators).

My choice is the .454 Casull.  Big enough for anything on this continent that doesn’t escape from a zoo.  Grain weights for the .454 commonly go as high as 400. 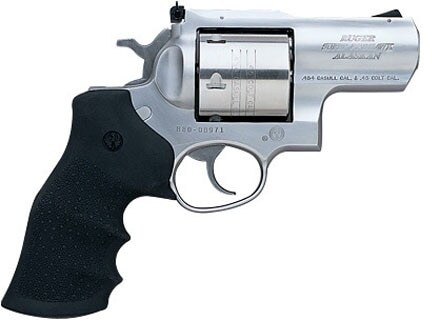 Snub-nosed guns aren’t as sexy as the super long barreled revolvers.  Even a five shot .38 with a two inch barrel looks a bit neutered.  Chopped.  And this is exactly how those guns came into existence.  But a .454 with a short barrel looks off balance.

But it isn’t how the gun looks that’s going to leave an impression on a grizzly bear.  And a short barreled .454, like the Ruger Alaskan, is going to be much easier to carry.  For starters, it will be easier to wear holstered.  Once it is holstered, an Alaskan will draw more easily.

The Taurus Raging Judge Magnum comes in a 4.5 pounds, with a 6.5 inch barrel.

The Raging Bull Model 454 weighs four pounds, and has a barrel just over two inches long.

Smith & Wesson’s 500 is another popular choice that comes in a short barreled configuration.  It is a bit less snubby at four inches.  Somewhere in this length is ideal.

Cutting back on the barrel length has negative consequences on accuracy.  It also depletes the muzzle velocity, and the effectiveness, of the round.

But it saves weight.  If you are considering a gun for protection from predators, you should have it on your hip whenever and wherever there could be predators.  You don’t take it off when you get back to camp.  And the lighter the gun, the more likely you are not to be bothered by cumbersome weight.

The differences here are minimal.  The Alaskan with a 2.5 inch barrel weighs in about a pound below the one with a 7.5 inch barrel.  But a pound, at the end of a long day, will feel much heavier.

Don’t get caught up in the sexy-big-gun-trap.  If you are thinking about a gun that you might need to draw quickly, an ugly snubby little bulldog of a revolver will be easier to use.  Longer barreled big bore handguns do have their appeal, especially for those inclined to hunt with handguns.  But they just aren’t practical to carry.  And a lighter gun will be less of a bother.

And these guns aren’t cheap.  Maybe this is because they are newer, but even the Taurus, a company that sells less expensive handguns, still runs close to a thousand bucks.

But for serious protection, I think they are worth it.  A comparatively modest round like the .454 Casull can be effective enough.  And less likely to smack you in the forehead.  A .44 Magnum can be effective, and will might cost less.

If I were to go back to Alaska now, I wouldn’t wander aimlessly in the woods, or I wouldn’t do it alone.  And I’d come prepared.  My choice would be a Ruger Super Redhawk Alaskan in .454 Casull.