Aside from a few radicals in the Democratic Party, very few politicians have the Chutzpah to outright challenge Washington’s most powerful lobbying group, the National Rifle Association.

For many lawmakers, it’s political suicide to speak out against America’s gun lobby or even to show tepid support for gun control (ask President Obama about this on Wednesday).

But New York City Mayor Michael Bloomberg does not care about what’s potentially toxic for his political career (there were rumblings about aspirations to pursue the office of president).  What he does care about, however, is subverting the 2nd Amendment rights of law-abiding citizens and if that means taking on the NRA then so be it.

He’s made this abundantly clear with the formation of his new Super PAC, Independence USA, which is essentially a $15 million fund aimed at getting pro-gun control candidates at the city, state and federal level elected into office.

One has to respect his commitment to his cause.  In the case of the California race involving Rep. Baca, for example, Bloomberg’s single donation more than doubles what both candidates have spent on the race combined, according to the National Journal.

While Bloomberg is not shy about spending his own money, the long-term goal is to build the PAC’s funds and lobbying power so that it rivals that of the NRA (which has an annual budget of around 200 million).

“There has never really been an effective counterweight to the NRA — at least in terms of dollars, cents and the ability to get a message out,” Stefan Friedman, a spokesman for Independence USA told the National Jounral. “I think the mayor’s been clear this is an issue he cares very passionately about and this could very well be a curtain-raiser to the future.” 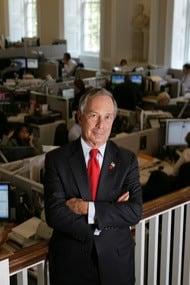 Bloomberg himself has voiced an ‘if-you-build-it, they-will-come’ type of philosophy with respect to his PAC and its ability to combat the gun lobby.

“You’re not going to beat the NRA overnight,” Mr. Bloomberg told the New York Times. “As you get going, people start realizing that there’s a sane group of people out there that want them to do intelligent things, and that that’s where their support is going to come from.”

Thankfully, though, the NRA has been keeping a close eye on Bloomberg, recognizing the real threat that he poses to gun owners.

Arulanandam also chided the Mayor for the manner in which he’s handled super storm Sandy.

“The message that he’s sending is he’s so obsessed with banning guns that he’s trying to influence federal and state races from Pennsylvania to Florida to California instead of helping the victims of Hurricane Sandy,” Arulanandam said.

Following Tuesday’s election, the NRA might need to ramp up its efforts to fight Bloomberg and his fledgling Super PAC.  If the NRA fails to get an early jump on this, it could spell big trouble down the road for law-abiding gun owners.

And what’s the best way to fight MAIG and Independence USA?

Converting non-gun owners into responsible gun owners.  My experience is that everyone loves to shoot; it’s just that some of us don’t know it yet.  Personally, I’d love to see the NRA do more community outreach and focus on winning the hearts and minds of the 200 million non-gun owners in the U.S.

Of course, the NRA can’t do it alone.  It’s time we all step up and do our part because, one thing’s for sure, Bloomberg is not going away any time soon.