The truth about The Truth About Guns and the Obama campaign

On the morning after the re-election of President Barack Obama, many people will be dissecting and analyzing all the events leading up to the incumbent’s victory over Republican candidate Gov. Mitt Romney. What small events precipitated the final election results? Who commanded the field to capture hearts and minds of the public? And who in the back pulled the strings to spread the message? 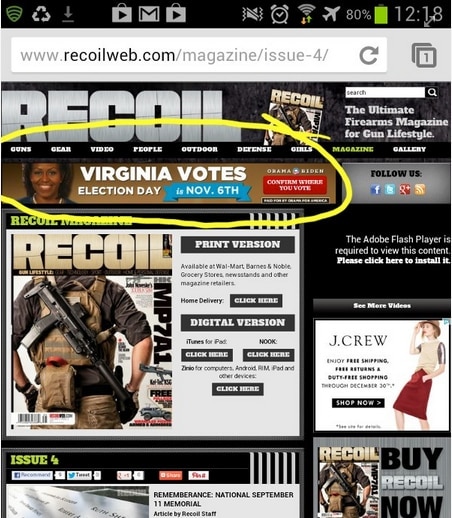 And who should be surprised, that the same company whose founding editor claimed that it was a good thing that the general public be prohibited from accessing certain firearms, that they were too dangerous to be privately-owned.

RECOIL magazine ran Obama campaign ads, but does that mean they actually supported Obama leading up to his re-election? How much control does a publisher have over its ad content? According to Robert Farago and The Truth About Guns, a publisher is completely responsible for everything that shows up on their website. 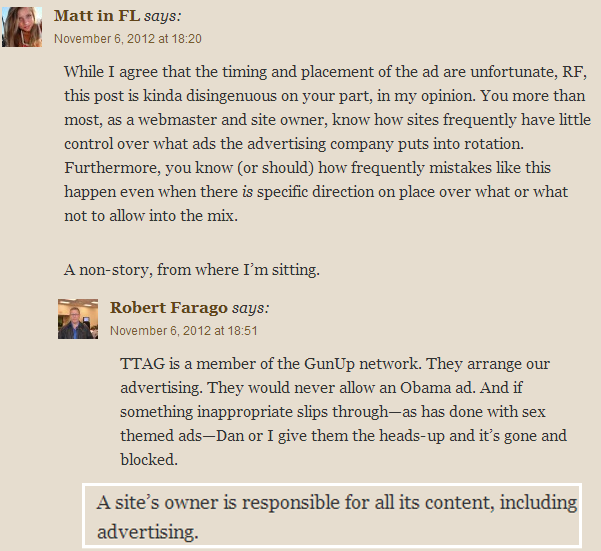 So you need to know this, then. TTAG campaigned for Obama going back at least to April 16 of this year. That’s the first time we caught this nearly-identical Obama campaign advertisement running on the front page of The Truth About Guns. 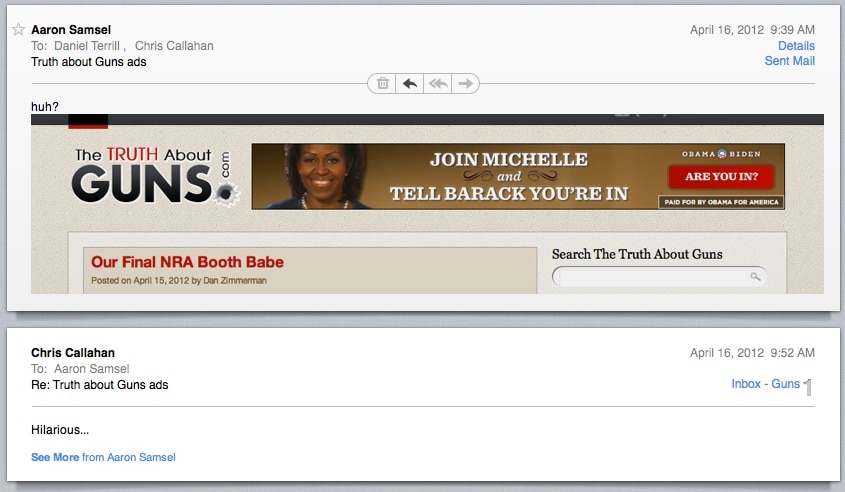 By the transitive property, Robert Farago is responsible for re-electing President Obama. Don’t like it? Take it up with TTAG.

The Truth About Guns started around 2010. Where was Farago prior to that? Was he working directly with the Obama cabinet to set up a gun website to secretly divert gun owners and gun rights supporters over to the Obama cause? Was he in Hawaii forging a long-form birth certificate for the President? We just don’t know.

Look, we get it, picking on RECOIL is fun, if sometimes a little too easy. After editor Jerry Tsai went and said that it’s good that Heckler & Koch refuses to sell a commercial variant of the HK MP7 to the general public, people all over called him out on it. And instead of immediately reversing his position, he defended it, then started to cry and fling poo everywhere. It was a fun week.

We doubt very much that TTAG or RECOIL actually endorsed Obama, that’s just how advertising works with websites. You give up control of a chunk of each page to your ad provider, and it’s their job to find ad sponsors. You can completely lock down control of which ads run on your website, but that is almost a job in and of itself, and then you wouldn’t have time to run, you know, content.

RECOIL screwed up, in more ways than one. The fact that they still make mistakes is proof that they’re human. And it’s OK for The Truth About Guns to screw up too. We’d be lying if we said we’ve never screwed up. We have, a bunch. (Thanks for sticking with us, really.) But there’s still a right way and a wrong way to do things.

So. TTAG. Either RECOIL made a mistake and ran an embarrassing ad, or, The Truth About Guns actively—successfully—campaigned for the re-election of President Obama. Which is it?