The C.O.P. Double Barreled Over Under

Sometimes I wonder about my taste.  I see some guns and I think, I have to shoot that thing, even when I know it won’t be fun and that fun is not the point.  A derringer is not a target gun, unless it is one of the odd-balls from American Derringer.  The derringer is most often a weapon of last resort.  A get-off-me-gun in the truest sense.

So it is with the four barreled C.O.P. derringer.  This slick looking gun is a compact monster.  The Compact Off-duty Police .357 was designed in 1983 by Robert Hillberg, an obscure firearms wizard that deserves much more fame than he receives, and built by the now defunct COP Inc, in Torrence, California.

The C.O.P is a four barreled, striker fired gun that shoots .357 magnums from an almost nonexistent barrel.  The gun is relatively compact, and comes in in at just over five and a half inches.  Width is modest for an side-by-side design: 1.062 inches. 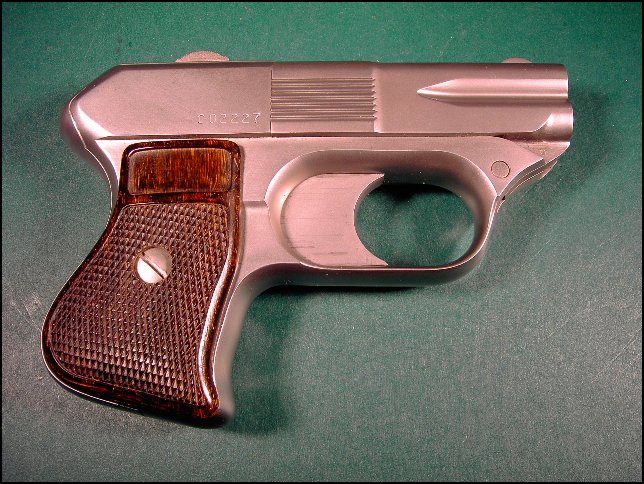 There is not a lot to hold onto.  Though the C.O.P. is just over four inches tall, very little of that is grip.  So the .357’s recoil is going to be especially punishing.  But like I said, the C.O.P. is designed for self defense, not plinking.  And if you were to ever need a gun like this for its intended purpose, recoil would not be your primary concern.

Empty, the C.O.P. weighs 1.75 pounds.  That may be why there aren’t more of these things in circulation.  The Ruger LCR in .357 weighs in at just over a pound, though that is not really a fair comparison.  The revolvers of the 1980s were in the same weight class as the C.O.P.

The barrels pop up like many break action shotguns and derringers.  They are milled stainless steel, as is the frame.  While the stainless exterior is reasonably slick, it hides an complex internal firing mechanism. 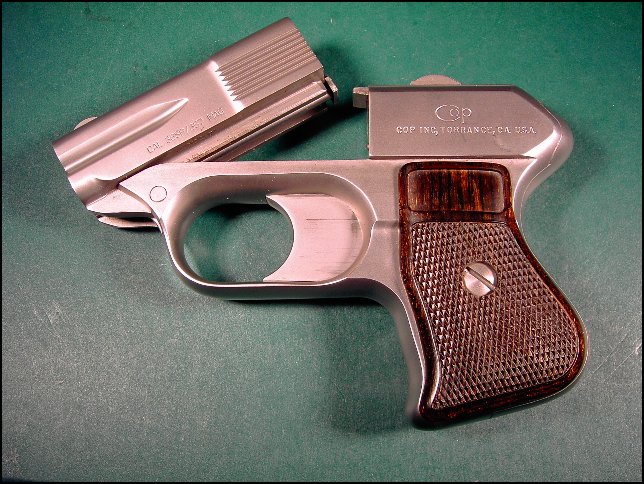 But there is nothing on the outside to snag.  And this is where the COP trumps some of its competition.  The sights are well rounded (and a bit superfluous).  Even the barrel release latch is flush with the frame.

The C.O.P.’s trigger is stiff.  That’s the biggest complaint I hear.  There is that recoil, thing, too, but that’s not a problem since it is a given.    But the trigger is an issue, if not an actual problem.  While most of the competing revolvers offered single or double action trigger pulls, the C.O.P. is a double action only gun with a heavy pull.  Each trigger pull ratchets a striker that fires one round at a time, in sequence.

The trigger pull, combined with the super short barrel, meant a sacrifice in accuracy.  This is an issue that plagues many derringers.  Triggers are, at their most basic, levers.  And a longer lever means easier work.  When the lever is shortened in these small guns, it requires greater force.

The C.O.P. didn’t last nearly as long as it should have.  That’s a given.  But the concept hasn’t died out.  Faded, yes, but the C.O.P. isn’t dead.  The old guns are popular collectors’ guns, and are usually available on the auction sites.  But there is talk of bringing back the C.O.P., and other designs that are similar. 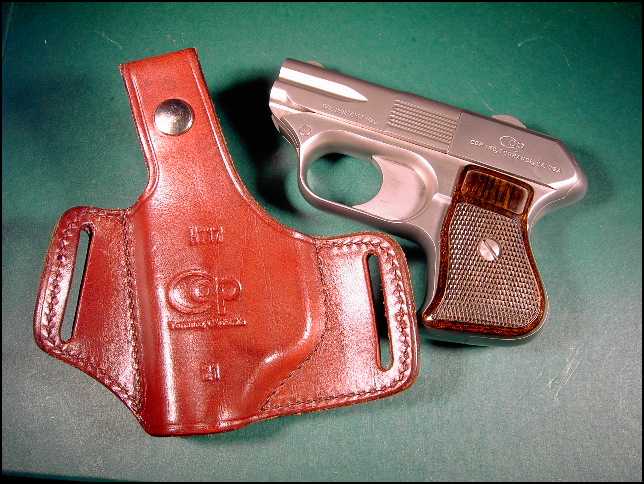 American Derringer is taking orders for the C.O.P. in .22 magnum and .357.  And the new Iver Johnson Arms has pics of a four barreled derringer on its site, though they aren’t taking orders as of yet.

But what about it?  I’m enthralled by the design, and I think I’d like to have an old C.O.P. in the safe, but would you carry one?  With all of the other options available for compact concealed carry, would you choose a two pound derringer?  I guess if it ran dry, the C.O.P. would still make a good projectile.