What is it with Walmart, women, and shotguns???

A few months ago, a Walmart employee or “associate” refused to sell a shotgun (a Mossberg 930) to a New Albany mother because it was “too much gun for a woman.”

Now, this week, there’s another report by a gun blogger from upstate N.Y., who runs the website “Walther and Me – A place to discuss my journey into the world of guns along with anything else on my mind,” about a similar incident in which she was told that a 12 gauge shotgun was too much gun for her.

Her telling of the incident is actually quite humorous:

Me: “If I was to get a shotgun, what kind would you recommend?”

The clerk said with a look of concern on his face: “Mam, I don’t mean to ‘downgrade [sic] women’ but you couldn’t handle one. If you do get one you should get a 20 gauge.”

I couldn’t help but laugh.  At least he didn’t ask me if I wanted it in pink!

Wow.  Someone needs to welcome this Walmart associate to the 21st Century.  Though, according to the blogger, the employee wasn’t being mean about it.  He just seemed to be a bit, to say this politely, ‘old fashioned.’

Also, unlike the other Walmart employee in New Albany, this one was willing to sell her the shotgun, as she explained:

Just to make it clear he wasn’t NOT going to sell me one like the story we heard a few months ago where a Walmart store clerk refused to sell a women a shotgun because it was “too much gun” for her.  In fact, he did tell me if I wanted to buy one that I’d need to provide photo ID and go through a background check but that shouldn’t take long at all especially since I already had my pistol permit which he knew I had because he asked to see the ID to purchase the ammunition.

I honestly don’t think that he meant any harm; I think that in his mind he was helping me because he believed that I could not handle the firearm being a woman. 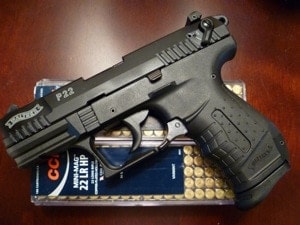 Stories like this one still amaze me.  They obviously indicate that there are certain members of the gun community who still believe that it’s a ‘boys’ club.’  Well, clearly, it’s not.  As Guns.com previously pointed out, women are leading the curve as the fastest-growing segment of the market.

The reality is women love to shoot as much as men do.  What’s more, they look much better doing it.  So embrace women.  Don’t “downgrade” or denigrate them.

In concluding her story, the blogger reminded us of the progress that we still have to make along the lines of gender bias and discrimination:

So far, no matter where I go locally to purchase firearms or ammunition it seems that I’m treated differently simply because I am a woman.  That somehow I couldn’t possibly know about nor have a passion for firearms.

Don’t you worry though, even though I’ve been downgraded I haven’t given up, I’m sure my perfect gun store is out there I just haven’t found it yet!

Collectively, if we all match her resolve and upbeat spirit, we can easily put an end to the ignorance that still exists out there.  What do you say?