I’m a sucker for pop-culture.  Especially when it is done right.  And Lucas, in his expansive Star Wars Universe, does it right.  Or whoever was responsible for the guns, at least.

The lightsaber almost overshadows Luke.  By the end of the original trilogy, the lightsaber takes on more significance.  It isn’t just a shiny sword; it becomes the emblem of the Jedi, the symbol of an endangered way of life.

Han Solo’s blaster is a little different.  Even though the prop began as an old broom handle Mauser, it is used as a visual reminder of the American west (as seen through a southern European, post war lens).

Carrie Fisher’s character Leia’s first gun is evocative of much more.  Before the iconic Princess has spoken her first words, she aims a thin barreled pistol and blasts a stormtrooper.  This is just after she’s put the Death Star plans into Artoo’s hard drive and sent the two droids on their mission to deliver the plans to Obi Wan Kenobi, and just before she is to deliver her first acidic rebuttal to Darth Vader, boldly standing up to the most terrifying man in the galaxy.

What this tells us is that Leia is a badass.  No doubt about it.  She takes care of business, shoots one of Vader’s goons, and then, when all seems lost, still stands up to the man.

And we forget about the gun.

Consider how much ink has been spilled about the Han-Shot-First argument.  Lucas re-cut the film several times to monkey with the timing of the Solo-Greedo shoot out.  It began with Han shooting first.  Later, Han would shoot only after Greedo shoots (and misses).  In the apologetic watered down comprise version, they shoot at almost the same time.

But we forget that our Princess shoots first, unprovoked (sort of).  I’m not sure how Castle Doctrine would relate in the imaginary interstellar future-past. 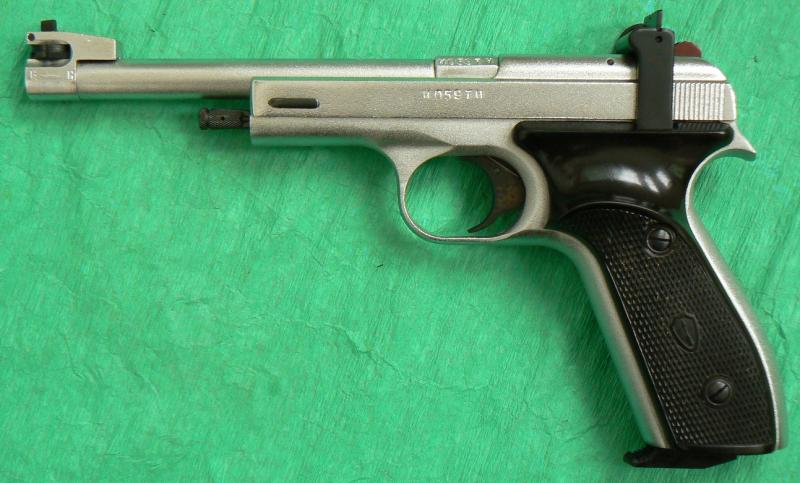 But the gun.  In A New Hope (Episode Four of Star Wars, and the first film), Princess Leia carries a Defender Sporting Blaster.  It is thin, like our heroic heroine.  And Leia is capable.  Against insurmountable odds, she doesn’t back down.

The Defender Sporting Blaster doesn’t get much screen time.  Leia has a brief seen with it at the start of A New Hope, and it returns (modified) in Return of the Jedi, specifically in the Endor speeder chase scene.

But the gun itself deserves a look.  The Vostok Margolin is a Russian .22LR target pistol.  It goes by different names.

Here are the details from IMFDB.org: 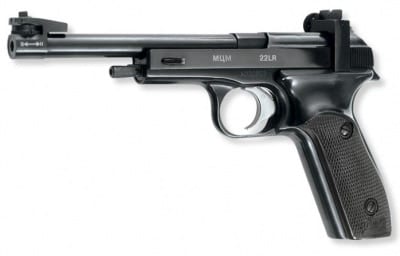 In short, it is a simple fixed barrel blow-back .22LR.  Its potential as a target pistol comes from the highly adjustable sights and the fixed barrel.  Some versions have heavily contoured grips and counter weights on the grips and/or barrels.  It isn’t designed to be holstered at all.  The take down wedge sticks out from both sides of the frame like small wings.  And the sights are fragile, and prone to being bumped out of alignment. As such, high-end versions of the MCM came in wooden cases with velvet lined padding. 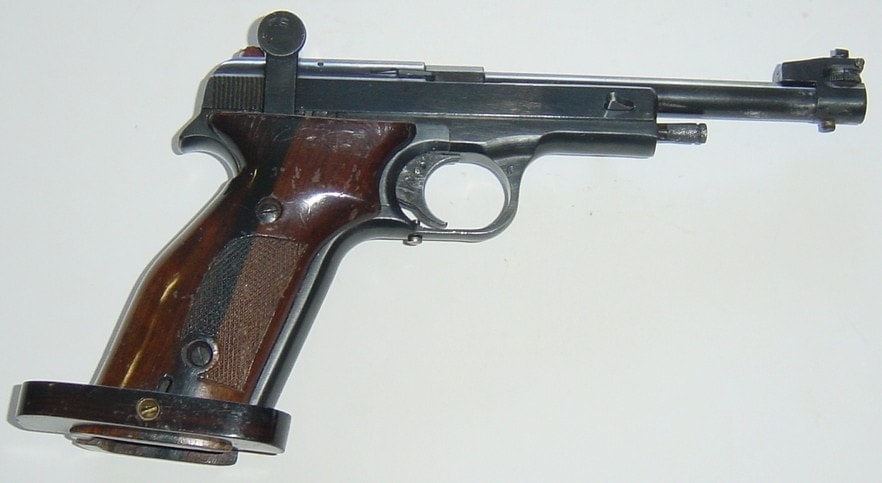 The Vostok Margolin now is a serious collector’s gun.  Not gun collectors, though.  Star Wars nuts (like me) demand a level of verisimilitude that even the film makers didn’t have to match.  And no Princess Leia costume (at least not one from A New Hope) is complete without a Defender Sporting Blaster.  Is it wrong that fans like me are willing to take a perfectly good piece of Russian sporting technology and make it into a prop?

As for Leia, the Defender Sporting Blaster is a gateway.  She is a take charge sort of Princess, and may be better known for picking up stormtrooper blasters and making short work of their useless armor.  The bigger blasters, like this Blastech E-11 Blaster Rifle (actually a modified Sterling L2A3), make for better movie magic. 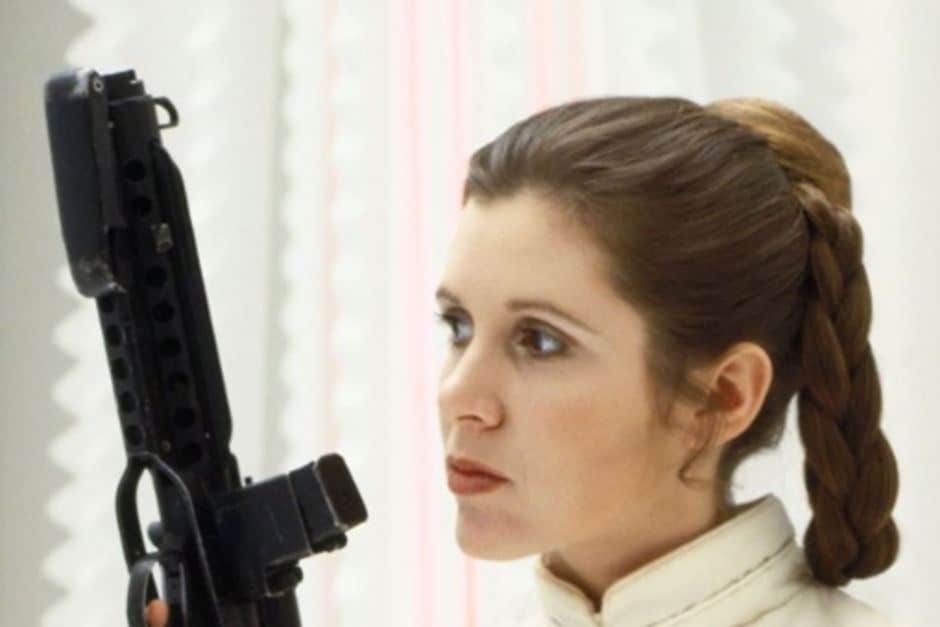 I think this conversation is different now than it wold have been a short while back.  Disney has bought Lucas Film, and Princess Leia, too.  In the long line of Disney Princesses, there is now one that can shoot straight.