The proprietor of the Southwest Shooting Authority of Arizona, located in Pinetop, Arizona has a message for potential customers:

“Effective immediately, if you voted for Obama, your money is no good here. You have proven beyond a doubt that you are not responsible enough to own a firearm. We have just put a sign up on the front door to save you the trouble of walking all the way in here,” he said in an ad featured in the local paper, the White Mountain Independent.

The owner of the gun store, Cope Reynolds, is not worried about upsetting people or even that his hard-lined stance could end up costing him money in the long run. 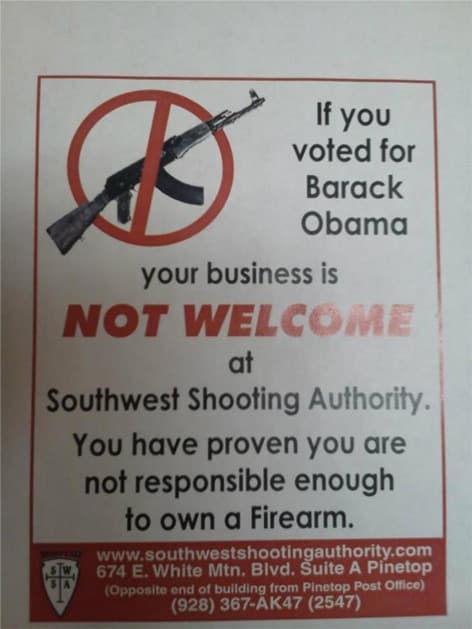 “We will try to demonstrate once again that the bottom line for our business is principle, not money.  Yes, it has been damaging at times but our values are intact,” the ad reads.

Whether or not one agrees with Reynolds politically, one has to admire his commitment to putting principles over profit, especially during such tough economic times.

Though, practically speaking, there’s not really a way to enforce the store’s policy.  There’s no guarantee, for example, that a customer will obey the numerous signs in and around the store that read:

“If you voted for Barack Obama Your business is not welcome at Southwest Shooting Authority.”

“If you voted for Obama, please turn around and leave!”

Symbolically, however, Reynolds hopes that his post-election, anti-Obama campaign has an effect or at least serves to remind folks that their decisions have consequences.

“I’ve been trying to wake people up,” he told Examiner.com in an interview.

Given the press his stunt has garnered amongst various gun publications and blogs, there’s little doubt that people are receiving his message.  However, some wonder whether it’s the right message to be sending.

“Congratulations Southwest Shooting Authority of Arizona, you’ve just effectively dissuaded a majority of voters from the gun community,” wrote blogger Christopher Burg of A Geek With Guns.  “I know that many people in the gun rights movement are butt hurt over the election results but lashing out at the people who voted for Obama isn’t going to help the cause of gun rights.” 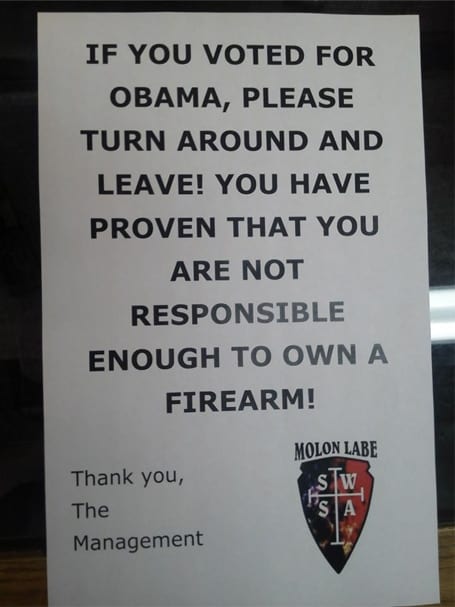 In, perhaps, Lincolnesque fashion, Burg argued for a united gun community, not one that is divided across party lines.

“Instead of alienating Obama’s supporters we need to reach out to them. Gun rights shouldn’t be a Republican or Democrat issue, it’s should be an all-inclusive issue that accepts people from all manners of political ideologies,” Burg wrote.

Well, all of this raises an interesting question, i.e. who’s right?

Should the gun community embrace bipartisanship or should it seek to reinforce the traditional political divide?

Should Obama voters feel shunned from the gun community for reelecting a president that has openly argued for reinstituting an assault weapons ban?

Of course, there is more to the story.  Not all gun owners are single-issue voters.  In fact, one would venture to guess that of the 100 million or so gun owners, only a small percentage vote exclusively on the issue of guns.

So, it stands to reason that someone could be both pro-Obama (as far as his economic polices, social polices, etc.) and pro-gun (oppose an assault weapons ban and other forms of gun control)  – does it not?  It all depends on how one prioritizes each issue.