Before the Rhino: The Mateba 6

The Chiappa Rhino is one strange looking gun.  These innovative revolvers look like ready made movie props for something set in the used future landscapes of some imagined space-age wild west.

But where did these odd guns come from?  And why are they so weird looking?

Emilio Ghisoni, an Italian firearms designer born in 1937, was known for taking novel approaches to what many hardly considered problems in modern firearms.  He inherited a company that made machines that produced pasta.  But Ghisoni used his mechanical expertise to design guns.

Mateba (which is a three part acronym: Ma. Te. Ba.) stands for Macchine Termo-Balistiche.  My Italian is a little rusty, but I think this translates as thermo-ballistic machine.  Reliable sources can’t find consensus about this name.  Some claim Mateba was the name of the machine company, others argue that it was only the firearm company. 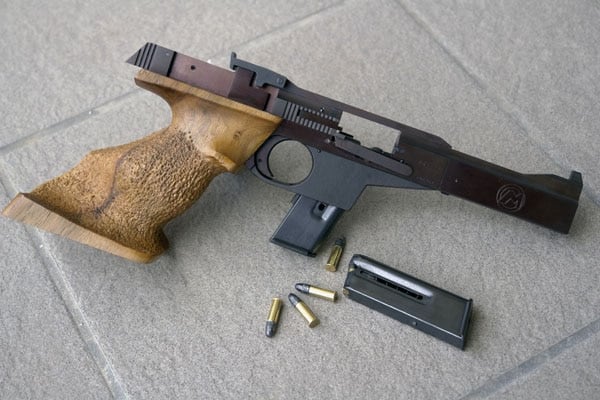 Ghisoni’s first gun, the MT1, was a .22 LR automatic meant for competition.  One of the most unique features of this design, and some of his others, is a relatively short barrel — at least when compared to the overall length of the weapon.  Ghisoni felt there were other factors in a gun’s design that influenced accuracy and timing.  But the MT1s were hard to sell in a market flooded with successful semiautomatics.

But there was another market.  Take Ghisoni’s first really successful design, the MTR series.  The “R” is for revolver, which Ghisoni turned every which way.

Shooters who compete with revolvers often deal with two distinct problems. The high barrels of revolvers increase muzzle flip.  And shooters have to cock hammers manually, or with a double action trigger pull, which can increase time between shots.

By moving the cylinder forward, and dropping the barrel (and increasing the number of rounds in the cylinder to eight), he hoped to produce a solid competition gun.  Many argue that he did, but the MT8 didn’t catch on. 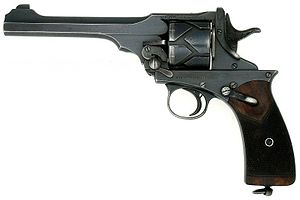 Revolvers normally fire from a chamber that has come to rest in the 12 o’clock position.  Ghisoni thought that moving the barrel down to the bottom of the chamber and firing from the 6 o’clock position would decrease muzzle flip.  With the barrel in line with the shooters arm, the energy will be distributed directly back.  This effectively removes the wrist as a pivot point, which is what makes a muzzle flip up in that characteristic arc.  But that wasn’t all.

Back in the early part of the 20th century, some revolver makers were losing ground to the influx of automatics.  Their solution to this problem wasn’t to design competing autos, but to reinvent the wheel (gun).  Take the Webly Fosbery Automatic Revolver.  This odd bird used recoil energy to slide the barrel and cylinder back on the frame.  This would rotate the cylinder and cock the hammer.

The Mateba 6 shared this feature.  It is supposed to speed up repeat shots, something crucial in competition.  With the reduction in muzzle flip and the faster revolver action, the Mateba 6 gained a devoted following. 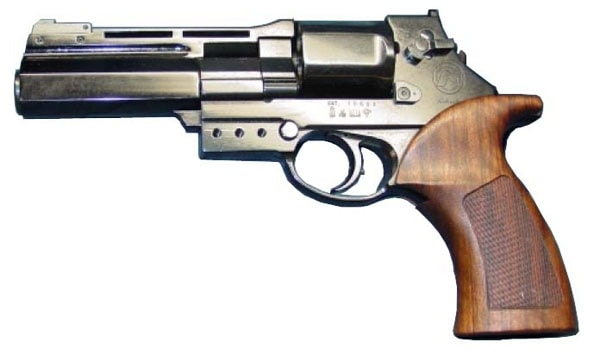 But the market for these types of guns was still small.  And the gun had yet to really embrace its ugliness and make it a selling point.  By the late 1990s the Mateba’s popularity had begun to wain.

Or Rino, to be more specific.  Rino Chiappa, current CEO of Chiappa firearms.   Chiappa is known for making .22 LR versions of existing guns.  But Chiappa saw something in the Mateba design that they could market.  And this, in my opinion, was what was missing from Ghisoni’s vision. 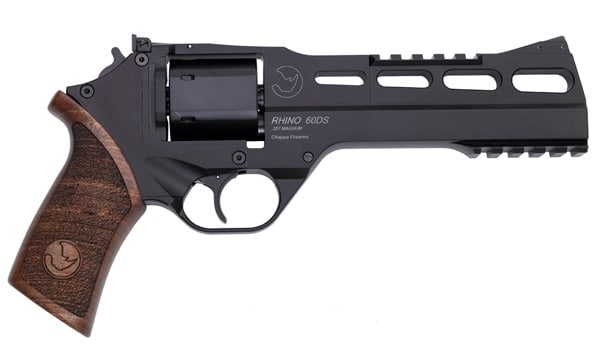 The Mateba MTRs are ugly.  But they work.  Rhinos are ugly.  With some simple modifications to the look of the frame, the Rhino has an aesthetic that can be sold.  And Americans can say Rhino.  We have a context for rhinos in a way that we don’t for odd Italian acronyms.

And they’re selling well.  The Rhino was the last project for Ghisoni.  He passed away in 2008, just as Chiappa was gaining attention for its strange new beastly revolver.