Indianapolis Sen. Jim Merritt and Metro Police Bomb Squad Commander Ron Humbert are calling for an end to the unrestricted sale of Tannerite, a popular and increasingly common exploding target material, and other compounds like it.

Tannerite is used to make reactive targets, targets that flash, throw a cloud of smoke and make a lot of noise. This can be used to get instant feedback from targets that are too far away to easily see bullet holes in and to make up-close targets a lot more entertaining. It is used for training and entertainment purposes by law enforcement, military and just about everyone else in the world of guns. 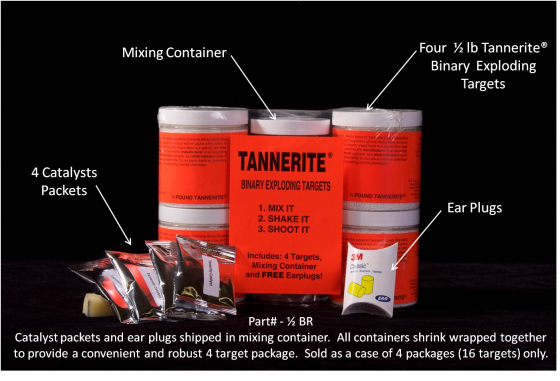 Tannerite is a binary explosive, meaning that it’s sold as two separate compounds that by themselves are not explosive and are incredibly stable. It isn’t until they are combined that there is any boom potential. It’s no more an explosive than a box of cake mix is a birthday cake. Because it isn’t explosive as it is packaged and sold, it is not regulated by the ATF.

And even when it is combined into an explosive, as long as it’s used legally, it remains unregulated.

Merritt and Humbert don’t think that’s safe at all, with Merritt claiming that Tannerite is a threat to homeland security. Really?

Of all the explosive compounds out there, Tannerite isn’t very good. That is to say, it’s not very efficient and it requires a large amount of material to effect its target. Tannerite is hard to detonate and mostly just smokes, at least compared to many other explosives. Just to give you an idea of how inefficient it is, here is 200 pounds of it being detonated by our Georgian Georgian.

It’s pretty cool, but not mind-blowing. In fact, Tannerite being hard to detonate is precisely why it is used as a shooting target. Even when it’s mixed, it’s not very inclined to go off. You have to use a high-energy impact to start the explosion, such as a bullet traveling at supersonic speeds, or another explosion, like one generated by a blasting cap. So even if Tannerite itself isn’t regulated, the means to detonate it are.

Tannerite’s record for being used maliciously and causing injury is practically non-existent. There are far more abused materials, like gasoline, that they are not calling to be regulated. Not that it is completely safe and that there are no risks, but if you’re at a live fire range, there are definitely more important things to be mindful of.

Of course we still urge all shooters to be careful with the stuff, whether you’re shooting half a pound of it or 50. And as always when working with something that’s explosive, don’t use it if you can’t control any potential fire. We don’t want shooting to lead to wildfire. But worry more about that guy who keeps muzzling everyone around him while he’s got his finger clearly inside the trigger guard.

There is one serious thing to be concerned about surrounding a Tannerite ban. Tannerite is popular because of how tremendously safe it is, but in the absence of this particular explosive, people will still pursue reactive target materials, including explosives that are relatively dangerous. We’d be more worried about homemade explosives and reactive targets than store-bought Tannerite.

That is perhaps why Merritt isn’t seeking an outright ban, just a limit on how much a person can buy at a time and instating some type of binary explosive tracking system.

There is a silver lining here. While these men are clearly attempting to enact laws prohibiting a certain brand of fun, what’s interesting is what, exactly, they’re targeting.

When Humbert said, “You can take it out of its original intended purpose and you can make something criminal out of it,” for once, no one was talking about the guns themselves. There will always be state officials and bureaucrats who are out to ban having a good time, but in the world of firearms, they’re not going after the things that are actually designed to harm, they’re pursuing something that maybe might one day somehow be re-appropriated as a weapon. The guns they’re not even bothering with—that’s politically unsupportable.

WTHR of Indiana had this to report.


We would like to point out to all those involved that tampering with, damaging or defacing a mailbox is punishable with sentences up to three years and fines up to $1,000.

Still, one thing we couldn’t help but notice was that the instant that mailbox took flight, everyone was smiling and having a great time at the range—including Sen. Merritt. Why, if they keep shooting the stuff to raise Tannerite awareness, they may just wind up changing their minds.