Lucid is updating their well-made and popular HD7 red dot optic. They’re not changing the design, the new version will be just as rugged and clear as the previous generation, but it will have updated reticle options. This third-generation HD7 will become available very shortly, and should be in distribution channels by December 2012.

A fixed parallax-free one-power red dot sight, the HD7 is a commercial optic designed for service with shooting enthusiasts and military and police users alike, specifically for those on a budget. The going rate for an HD7 is less than $250, and it’s overbuilt to a degree normally reserved for high-end optics.

Where the Lucid cuts costs is in its very simple feature-set and controls.  It has nine brightness settings, ten if you count off, and the brightness can be set to automatically adjust itself. It has 1/2 MOA click-adjustable windage and elevation turrets, and the new HD7 will use capped turrets for added protection.

Like the second-generation HD7, the new optic has a variable reticle with four reticle options. It will keep the single dot and circle-dot reticles, but replace the crosshair and circle-crosshair reticles with chevron and T-reticles with bullet-drop compensators tuned for .223 Remington/5.56 NATO 55-grain ammo. The HD7 is a taller optic that’s naturally suited for AR-type and other flat-topped rifles so this makes perfect sense. The HD7 will lower-1/3 cowitness with standard AR iron sights.

Another feature that’s being added is that the objective side will be threaded to accept a killflash, which is good news for anyone in the business of getting shot at.

But the best news is that the upgrades to the HD7 will not affect its price. And right now, while prices are running high, that’s a welcome relief. 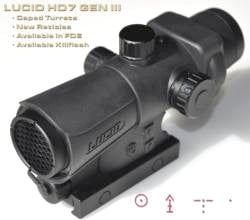 The HD7 has a chunky cast aluminum chassis with a thick rubberized skin for extra protection. It has an integrated mount so you don’t have to buy one separately, and it runs on cheap and plentiful AAA batteries. The battery life is impressive for optics in this price range, and one AAA will run the reticle for 1,000 hours, or six weeks of continued use. It has an auto shut-off that will power it down after two hours to conserve the battery.

HD7s also come with a screw-in 2x magnifier or doubler, but will also work with Lucid’s flip-out 3x magnifier as well as their 2x-5x magnifier.

Lucid has proven that their optics can hold their own against red dots that cost twice as much, even with hard use in harsh environments. The HD7 is waterproof, fogproof, shockproof, nitrogen-purged and rated for use with rifles chambered up to .458 SOCOM. If you have an AR and want a tough red dot optic without having to spend a lot, you need to put the new HD7 on your short list.