Gun sales are soaring in the wake of President Barack Obama’s reelection. Evidence for the beginning of what could be a second Obama gun boom are both anecdotally and empirically visible.

To start with the anecdotal evidence, there’s no shortage of dealers and gun shop owners reporting a spike in sales.

“We’re going from normally six to eight guns a day to 25,” Mel Bernstein, owner of Dragonman Arms in Colorado Springs, Colorado, told KOAA-TV.  “I stocked up, I got a stockpile of these AK-47s, we’re selling these like hot cakes. Luckily I had an idea of what was going on because it happened with Clinton.”

Bernstein is referring to the rise in gun sales before the passage of the Clinton-era Assault Weapons Ban, which placed restrictions on firearms with the following features: folding or telescoping stocks, magazine capacity, pistol grips, bayonet mounts, flash suppressors, among others. The ban, as most of us recall, expired in 2004.

“Sales are up,” John Kielbasa, owner of Fernwood Firearms in Hankins, New York, told CNN.  “I had a guy waiting here first thing in the morning [after the election]. He came in, bought two AK-47s. It’s going to be good for me for business.”

What’s happening on the ground, so to speak, is also being reflected in the stock market.  Stock prices for the two publicly traded firearms manufacturers, Smith & Wesson and Ruger, continue to show strong returns, easily surpassing the return on the S&P 500 index, as seen courtesy of the Forbes chart below: 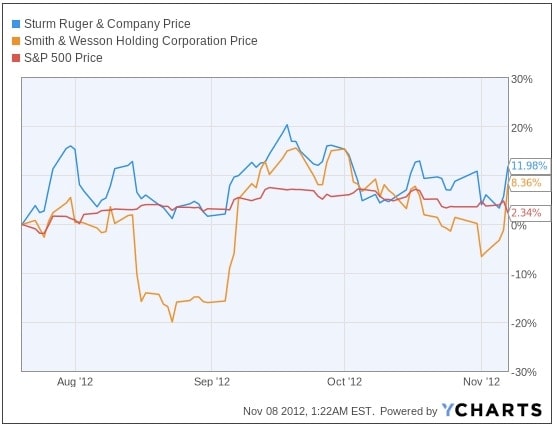 Since 2008 when Obama was first elected, profits for both companies have sailed, with S&W up 140 percent and Sturm, Ruger up 200 percent over the past four years, as Forbes reported.

Market analysts for Smith & Wesson believe this trend will carry on into the New Year.  According to their robust sales forecasts for fiscal 2013, company execs are now looking at numbers between $530 million and $540 million, as opposed to the earlier figures of $485 million and $505 million projected at the beginning of 2012.

“As we come into Christmas … there is a lot of consumer purchase activity,” James Debney, chief executive for Smith & Wesson, told analysts from Reuters on a conference call. “We want to be in the forefront of the consumer’s mind.”

Background checks, another empirical factor that serves to give one an impression of the climate of the gun market, also shot up during election season.

According to FBI data, background checks performed on potential gun buyers in October 2012 were up 18.4 percent from the previous year. 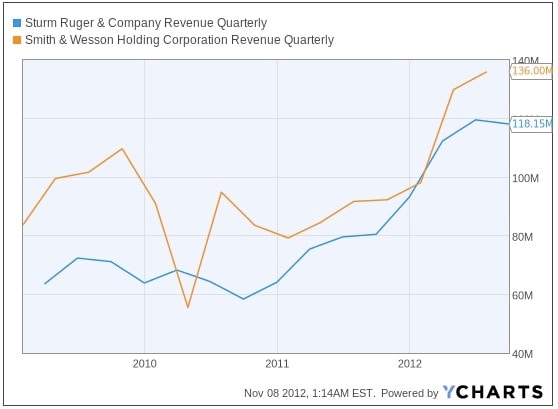 So, looking at all this information, it’s clear that there is a bit of a buying frenzy going on.  The question is why?

Well, the prevailing reason is fear that a lame duck Obama administration will enact confiscatory gun polices or implement another assault weapons ban.  With respect to the ban, some believe that what awaits could have severe consequences for gun owners.

“We would fully expect the ban to be more far-reaching, and more comprehensive [when compared to the Clinton-era ban] and a further infringement of the second amendment rights of law abiding Americans,” Lawrence Keane, National Shooting Sports Foundation Vice President, told CNN.

I still believe that the chance of an AWB being passed by congress is pretty slim.  After all, pro-gun GOP lawmakers control the House.

In a previous Guns.com article, many of you voiced concern over the prospect of Obama issuing an executive order that, to some extent, places a ban on certain firearms.

While it’s certainly possible (during term one, the Obama administration issued a mandate which said that gun dealers in border states had to report multiple sales of long guns within any five day period, it was done in an effort to better track suspected straw purchasers), it’s unlikely.  The reason?  Obama’s limited political capital in Washington.

If Obama wants to get things done (immigration reform, tax reform, entitlement reform, deficit reduction), he needs to do so on a bipartisan basis.  Issuing an EO banning “assault weapons” would cripple his ability to work with GOP lawmakers.

Moreover, if he did actually issue the EO, the SAF or the NRA would immediately file a lawsuit challenging the constitutionality of such a “ban.”  I suspect that given the current makeup of the Supreme Court, it’s very likely that a ban on commonly owned firearms and accessories (“assault weapons” or modern sporting rifles, high-capacity magazines, etc.) would be found to be unconstitutional, etc.  So, in the end, it would be futile for Obama to go the EO route.

All that said, we’ll see what happens.

In the meantime, given the current state of things, the best advice is don’t get fleeced by greedy sellers or dealers.  Be Patient.  Even though it’s arguably a seller’s market, there are plenty of good deals out there, so don’t overpay.