Look, it’s no secret, Illinoisans want the same rights that (almost) everyone else has, specifically, the right to keep and bear arms for self-defense outside the home. 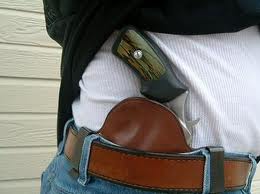 In all 10 counties, the advisory measure passed by overwhelming majorities, a result that is difficult to ignore, say pro-gun advocates.

“I think the message will be heard,” because some counties that voted on the issue were in more Democrat-leaning northwest parts of the state, Valinda Rowe, the spokeswoman for Illinois Carry, told the Associated Press.

“Hopefully [the Democratic leadership] will see a correlation here that there is widespread support for this issue,” she added.

Though, those who oppose bringing concealed carry to the Land of Lincoln believe that the referendum did little to change the status quo because the majority of the counties that participated were downstate, which has been historically pro-carry.

“They were … from areas that always have been supportive of concealed carry, but were not even on the ballot in counties where they would have had more impact,” Colleen Daley of the Illinois Council Against Handgun Violence told the AP.

Daley also underscored the fact that the newly elected Democratic lawmakers would vote against a concealed carry bill were one to be introduced in the next legislative cycle, which starts Jan. 9.

Yet, there is room for optimism.

As pointed out by Todd Vandermyde, the Illinois-based NRA lobbyist, Illinoisans are currently waiting for the U.S. Court of Appeals for the Seventh Circuit to rule on a case challenging the state ban on concealed carry.

The case, Shepard v. Madigan, involves an elderly church treasurer who was brutally beaten and attacked by a six-foot-three-inch, 245-pound man with a criminal record and a history of violence.  The victim, Mary Shepard, is suing for the right to carry.

A ruling is expected in the near future and should the court decide that concealed carry is a right, not a privilege; then the chances of the General Assembly passing a concealed carry bill increase dramatically, Vandermyde told CBS St. Louis.

Regardless of the outcome, we can expect both sides to continue the fight.  Hopefully, when the dust finally settles, justice, common sense and the Constitution will prevail.