Gangsters, Outlaws, and Lawmen Auction: What Would You Pay For A (Strange) Piece of History

Last month, RR Auction held a thrilling sale they called Gangsters Outlaws, and Lawmen.  Much ado was made of the two high-dollar ticket items — Bonnie Parker’s Colt Detective Special .38 and Clyde Barrow’s Colt Army 1911 .45 — which sold at $264,000 and $240,000, both of which were on their bodies upon death.  But aside from the Bonnie and Clyde collection, the rest of the auction has gone largely unmentioned.  If the names Dillinger and Capone ring a bell, read on.  With over a hundred total lots, the remaining auction pieces ran the gamut from rare to fascinating, beautiful to macabre.

How much would you pay for a solitary hair inadvertently plucked from Mr. Dillinger’s mustache after his death?  As it turns out, that auction gavel hammered down a wild $5,400 dollars from the starting bid of $3,000.  However, it’s not quite as strange as it seems.

Following John Dillinger’s death at the hands of federal agents, thousands of people gathered at the Cook County, Chicago morgue to view his body.  Sometime while his body was displayed, as many as four death masks of his face were made.  During the casting process, one of his mustache hairs must have gotten stuck to the inside of the mold, and voila — here we are.  For what it’s worth, the mustache hair was not a stand alone item. Included in the large frame is a typed note regarding Dillinger signed by FBI Agent Melvin Purvis, a portrait of Purvis, a reproduction wanted poster of Dillinger, and of course the aforementioned tiny hair.  A very — well, unique — collectible to say the least.

It is worth noting that at the time Dillinger’s death masks were made, numerous “limited edition” runs of masks were molded from the originals.  One of these editions — #6/100 changed hands at the auction for $720.

Aside from the guns of Bonnie and Clyde, another noteworthy find at the auction was Al Capone’s .25 Colt Model 1907 Vest Pocket semi automatic pistol.  Over the years, the little pistol had retained roughly 70 percent factory blue, original Colt grips and correct magazine. Though it was not clear how long Capone owned the pistol or if he ever used the weapon, it nonetheless was his. 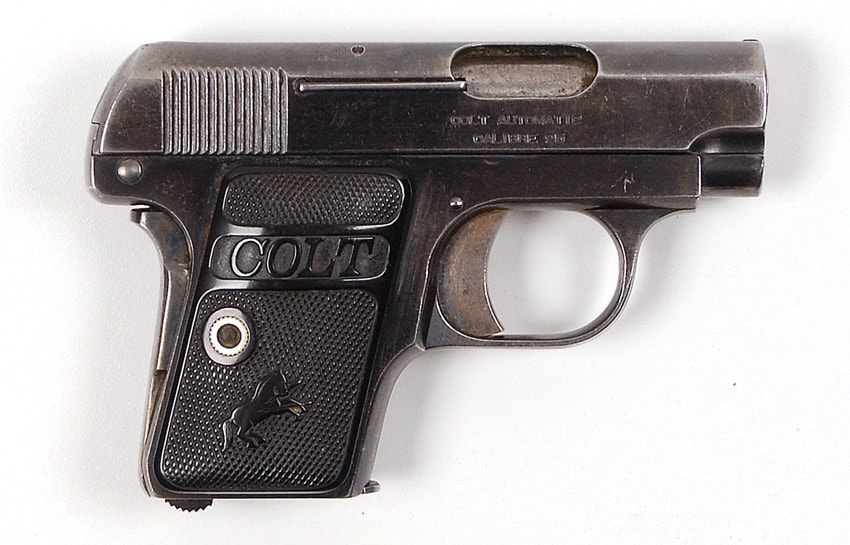 Documentation included a notarized letter from the previous owner to an auction house in 2000.  The man states he will be 78 years old, and that when he was a child in Chicago, his father was a bootlegger working for Capone. Apparently, Capone would stop by for a taste of the writer’s mother’s Italian cooking, and Capone gave this pistol to his folks for protection. 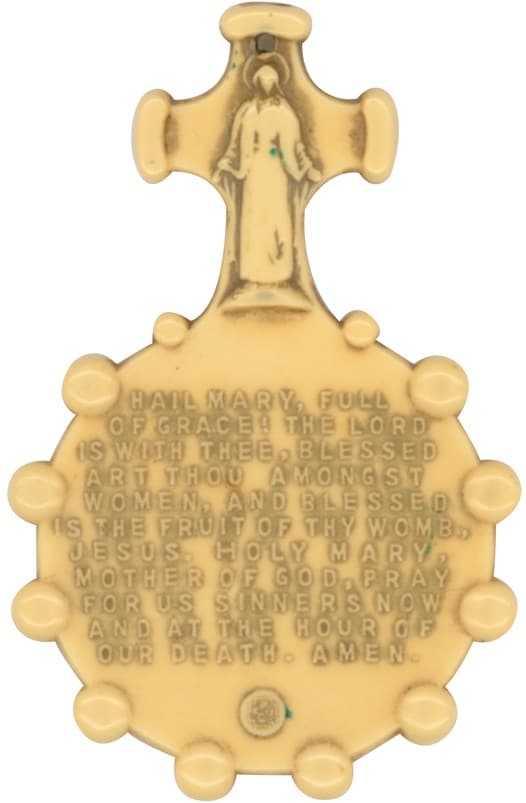 Sadly, it was no great help, as the man’s father was killed when his car collided with a train during a police chase.  As with many items in the sale, the story drives the price.  If you wanted this piece of Capone, it would have cost you $14,400. Yet of all the firearms in the auction, this was one of the more affordable.

For those with a slightly lower budget or a taste for the curious Capone ephemera, there were numerous other auction items with ties to Capone.  One of the more unusual?  Al Capone’s personally owned and prayed-upon rosary center.  Provenance apparently proves that Capone carried the particular rosary from which this center was removed while he was in prison from 1932 to 1939, including time on the rock at Alcatraz.  It’s not clear what became of the remainder of the rosary, but this small white plastic rosary center sold for $4200.

As interesting as some of the odd-ball items may be, this is Guns.com and we best look at some of the guns that crossed the auction block.  This particular firearm of interest belonged to U.S. Deputy Marshal Pat Garrett. Forever remembered as the man who killed Billy the Kid, Garrett was also a bartender, customs agent, and once close friend of President Teddy Roosevelt.

Garrett’s sale gun was a National Arms Co. single shot No. 2 Derringer with a 2.5-inch barrel in .41 rimfire. The derringer featured scroll engraving, smooth walnut grips and a thin “knife blade” extractor.  Perhaps the most unique part of the lot was the included handwritten letter offering the gun for sale for $72.60 and stating it once belonged to Garrett, “the famous sheriff who killed Billy the Kid.”

The letter goes on to detail the provenance of the other items in the lot – a U.S. Marshal badge and an Indian beadwork coin purse, both items believing to have belonged to Garrett and having come from the collection of the New Mexico attorney general who pursued Garrett’s murderer.  Like many of the auction’s outlaws and lawmen, Garrett also met his end with a bullet.  In his case, the killer was never concretely identified.  A buyer anxious to own a piece of Garrett’s history paid $15,600 for the trio.

Those familiar with history recognize the name John Coffee Hays in connection with the Texas Rangers, fierce Indian fighting, and the Mexican-American War.  Hays’ gun for sale was a highly engraved caliber .36 Colt Fourth Model 1851 Navy revolver given to him by Samuel Colt, or “Col. Colt” as engraved on the gun’s backstrap.  The words “COLTS PATENT” are hand engraved on the frame, along with a man’s portrait left of the barrel lug and a wolf’s head on either side of the hammer. The cylinder retained roughly 75 percent of its roll engraved naval ship scene, and the gun still has its original one-piece ivory grips with the beautiful patina ivory gains over the years.

What makes Hays gift from Colt so interesting is the fact that Hays struggled to control the Indian population with his limited arms of single shot pistols and rifles until Colt’s repeating revolvers gained popularity in the 1840’s.  With Colt’s repeating guns, Hays’ victories — as well as the success of other Texas Rangers – mounted quickly.  Not only was this a boon for Hays, but Col. Colt was struggling to find a market for these very guns.  The purchases that followed from the Texas Rangers and affiliated men during the ensuing war allowed Colt to establish his Patent Firearms Company.  The gun at auction was no doubt a token of Colt’s gratitude to John Coffee Hays.

The revolver, with its 7.5-inch octagon barrel, was listed in very good condition.  With all the engraving and provenance, it’s a sharp looking piece, especially given the included original Slim Jim holster.  Though the revolver had a relatively low starting bid of $15,000, a serious collector paid $84,000.

To say that physical things are priceless defies the very purpose of an auction, yet the value of many of the pieces from RR’s sale speak to times, memories and stories far beyond the dollar.  To say the least, it was absolutely impressive to see all these historic items gathered in one place, only to be dispersed again.  In addition to those above, auction items with ties to names like Wyatt Earp, Bugsy Siegel, Lucky Luciano and Bat Masterson are all reminiscent of both romantic and rougher times past.  Gun lovers and history buffs interested in checking out all the items from the auction can view complete results and descriptions at RR Auction.