The AK-12, the latest firearm platform to come from Izhmash, will be available with a commercial variant for sale sometime in 2013, according to reports from the Firearm Blog and their Russian contacts. The AK-12 represents the most fundamental shift in the AK design ever, complete with all the features you expect from a modern rifle but with the track record of the most successful small arm ever made.

It is clear that the AK-12 is still undergoing revision, as they’ve updated the magazine well, magazine release, barrel profile, muzzle, muzzle devices and front and rear sights. Izhmash is currently testing the design with help from the Russian Ministry of Defense as well as competitive shooters.

The semi-automatic commercial versions that we know about so far will be chambered for .223 Remington/5.56 NATO and 12 gauge. While both of these calibers are popular in the US, if Izhmash doesn’t also offer 7.62- and 5.45x39mm models from the start people will be a little disappointed.

Izhmash has announced their intention to bring 10 new firearms to the market in 2013, and the AK-12, in five or six calibers, could make up the bulk of next year’s new Izhmash products. Current Saiga rifles, their commercial AK-100 variants, are available in all the above plus several others, including .308 Winchester/7.62 NATO, 20 gauge and .410 bore.

Getting them over here for sale in the US is another thing. In their standard configuration, there’s no way the ATF will allow these into the country. Izhmash is going to have to sporterize them like they do with Saigas, and export them with Monte Carlo stocks and modified fire control group.

We’re almost certain that the standard fire control group is identical to the original AK assembly, which means that it won’t be long before conversion and restoration stateside will be possible.

However, there are enough other parts that are completely different, including the gas piston, the bolt carrier and the buttstock that in order to have 922(r)-compliance parts some new manufacturing will be necessary in the US. 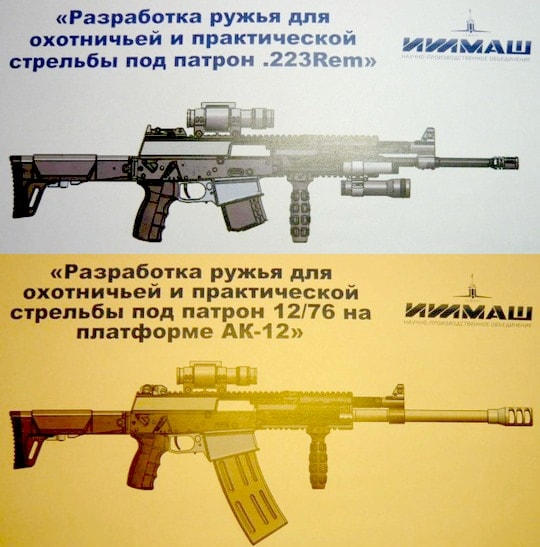 Either Izhmash is going to have to spend money to set up an American company or they will have to expand on their partnerships with companies in the US to make these parts here. As cool as these rifles are, if Izhmash expects to sell many in the US they need to go out of their way to ensure that complete not sporterized rifles are available. If not, sales of the AK-12 will be bottlenecked by the ability for third-party manufacturers to design, test and market 922(r) compliance parts, which will take months.

This is in addition to a period of evaluation by the ATF, which means that even if Izhmash unveils their finalized AK-12 and its commercial variants today, they may not be available here until this time next year. That being said, Izhmash’s gift for the holidays is that maybe next holiday, you’ll have your very own shiny new AK-12.

The wait is going to be worth it. Everything about these new guns has been revisited, tweaked and polished. The dust cover is fixed, hinged and railed, along with the handguard. You can mount optics to it without having to worry about a wandering zero. The rear sight is now truly a rear sight, mounted just above the rear trunnion on the new railed dust cover.

Izhmash is likely to work in a drop-free magazine release, a major change from the older paddle release. The new bolt carrier features a last-round bolt-hold-open. The AK-12 has a reciprocating, self-closing ejection port cover, and if they are made available here, the pistol grip and buttstock have been completely modernized. And finally, the controls are ambidextrous and the charging handle can be reversed.

We can’t not want an AK-12, one in each chambering—make that two, no, five—but we have to be realistic that there’s going to be a wait. We still have our fingers crossed, and we’re praying for the stars to align on this one.