Sightmark is proud to announce a new version of their Mini Shot red dot sight, the Pro Spec and a slew of rear sight mounts for a spread of popular service pistols. The new mini red dot sight (MRDS) is improved in a handful of ways that make it a good optic for both-eyes-open shooting whether you’re running a rifle or shotgun. 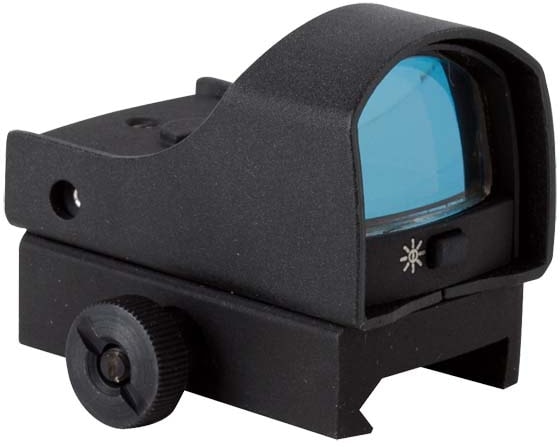 “The fused double pane glass makes the Mini Shot series of products an extremely accurate reflex sight,” said Jonathan Horton, Sightmark product developer. “The reticle is 100% accurate not only in the center, but also along the lens edges. With the addition of the protective hood and digital switch, the Mini Shot Pro Spec is better protected and easier to use, making it perfect as a primary or secondary weapon sight.”

The Pro Spec version has five brightness settings and has a variable run time, or 270 hours at maximum brightness. It’s powered by a single CR2032 battery and comes with all you need to mount it to a Weaver or Picatinny rail.

If you want to mount one on a handgun, good news as Sightmark is now producing Mini Shot mounts for standard 1911s, Springfield XDs and XDms, Smith & Wesson M&Ps, SIG Sauer P226s (and other SIGs that use the same rear dovetail), Beretta 92s, 96s and 90-TWOs, H&K USPs and Glocks with 1.18-inch wide slides (so not Glocks chambered for .45 ACP or 10mm, sorry).

It’s a very low-profile mounting system, screwed into an adapter that slides into the rear dovetail, replacing the rear sight. While not quite as high-speed, low-drag as some MRDS solutions, by using the existing rear sight dovetail, this mounting system is not permanent and requires little by way of gunsmithing to install.

It’s also a whole lot less expensive than having your handgun’s slide machined and refinished. “With the capability to mount several of the most popular pistols on the market, the pistol mounts have really increased the versatility of our Mini Shot,” said Horton. “Not only is the Mini Shot capable of mounting to shotguns and AR-style rifles, but now we’ve expanded the product line to work with pistols. Our team is excited about this accessory lineup and we plan to expand our pistol mount options in the future.” 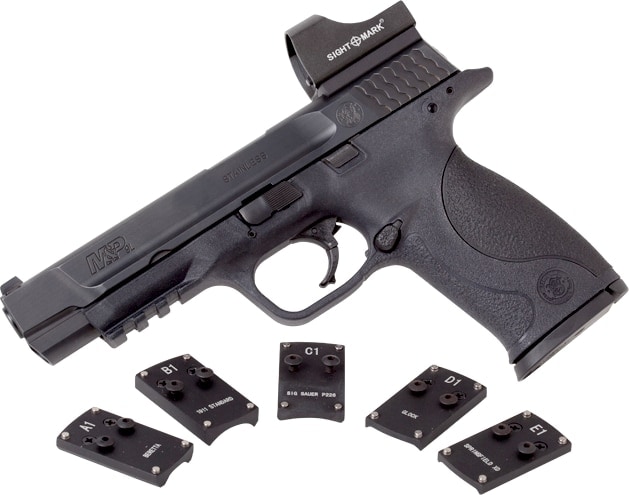 The Mini Shot mounts have an MSRP of $48 and work with both standard Mini Shot MRDS, which has an MSRP of $96 and the new Mini Shot Pro Spec which has an MSRP of $145. Real-world prices are slightly lower, meaning that if you want to run your pistol with the new Pro Spec with the appropriate mount and have to pay a gunsmith to install it for you, you’re still only looking at spending $200, maybe $250. That’s less than what many gunsmiths charge just to machine a slide for a red dot sight.

We think this a great way to find out what all the fuss is about concerning red dots on handguns. The Mini Shot already has a reputation for being a good deal, inexpensive but gets the job done and doesn’t mind a lot of recoil. The Mini Shot Pro Spec is promising, sharing the same specifications and durability but with better glass, added protection and more brightness options for a small amount more.

Like the original, the new Pro Spec has a 3 MOA dot. Not so large you can’t see your target, not so small it’s hard to see. It measures in at 47 by 30 by 39 millimeters and weighs 1.3 ounces. The objective lens is 23 millimeters wide and 16 tall. It’s shockproof and water resistant in rain, sleet and snow.

Even if you’re not interested in a handgun optic but just want a reliable, clear red dot that’s not bare-bones in the features department, an upgrade from the standard Mini Shot, check out the new Mini Shot Pro Spec. It’s available in red and green.