Combat City, an Orlando-based gun range, allows you to train in force-on-force settings using your own gun.

That is to say, instead of shooting paper targets, you can shoot at real people using your preferred self-defense weapon in a variety of training scenarios. 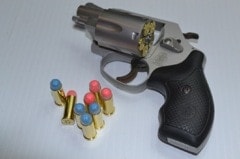 Now, of course, you’re not using live rounds during these training sessions.

Instead, you fire Simunition rounds, which are essentially paintball-like cartridges that can be fired through your gun(s).

However, before you even get to that point certain safety precautions must be observed.

“First thing: As soon as you get here, everybody’s checked. That’s our first deal — make sure nobody has any guns, knives, ammunition on them,” Combat City Owner Dave Kaplan told Wane.com.

Following the pat down, one of Combat City’s range masters modifies the barrel of your gun, putting in a restrictor so that only a Simunition round can be fired.

The difference after the temporary modification is minimal.

Before heading out onto the course, a converted grocery store replete with barriers and furniture to create lifelike, in-home settings, one must put on appropriate safety gear that covers the head, neck and family jewels.

Like in paintball, the man-marking cartridges carry a bit of a sting when one gets shot.  Though, Kaplan says, it’s all part of the learning experience.

“There is supposed to be a degree of pain with it so that you do learn from it,” said Kaplan. “Someone’s trying to hurt you. You learn how to be as tactical as a civilian can be.”

Combat City isn’t just a boys’ club.  Female instructor Tiffany Chapin spoke about the growing number of women who are interested in learning how to defend themselves.

At first they may be timid about the prospect of training at Combat City, Chapin explained.

“Most of the time, they do feel a little bit uneasy, little bit nervous,” said Chapin. “I think it helps them a lot to have a female instructor.”

But over time that changes, the women learn and adjust and become more comfortable with using a firearm under the stress of the training.

How long does it take? – asked the reporter from Wane.com

“Depends on the woman, or it depends on the person,” said Chapin. “But for the most part, most women walk out of here feeling very empowered, and that’s the key.”

Indeed, everyone learns at a different pace.

Questions: have you ever fired a Simunition round before?  Have you been exposed to some of the force-on-force training scenarios depicted in the video?  Have you ever been to Combat City?  If so, what was your experience like?