Walther is preparing to launch a new addition to their polymer P-series, the PPX. The PPX uses more conventional controls and operation, making the PPX a low-cost option that maintains the ergonomics, reliability and reputation of the Walther name.

Unlike other recent Walther P-series pistols, the PPX is not striker-fired. It uses a pre-tensioned hammer for a short, light 6.5-pound trigger pull. Another change is to the more common American-style magazine release, with a reversible push button in the frame where the trigger guard meets the grip. Walther pistols like the PPQ and P99 are striker-fired and use a paddle-style magazine release.

The MSRP for this gun is said to be less than $500, meaning that even at $499, it will probably run about $400 in stores. Assuming everything else about this pistol works out, it will be an obvious recommendation for anyone looking for a service pistol on a budget. Walther will also offer it in two-tone for $50 more.

The PPX has a 4-inch barrel and will be chambered in 9mm and .40 S&W. It has a respectable capacity of 16+1 in 9mm and 14+1 in .40. The magazines look a bit changed and we expect them to be specific to the PPX. This could be a good thing as magazines for Walther’s P99 and PPQ cost about $50 per. The sights look similar to those already in use with Walther’s pistols, meaning there could be a certain level of aftermarket open to the PPX up front. 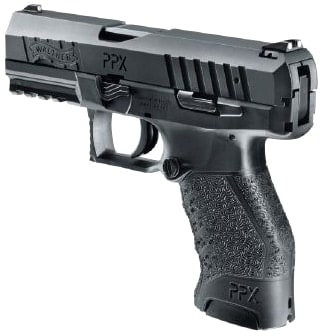 Still, as this is Walther’s budget option it’s not going to be super-important to have a big aftermarket ready for it right away. Walther has future plans to offer this pistol with an extended, threaded barrel, so it stands to reason that an aftermarket will build up around the PPX sooner or later.

For now, we’re curious about its technical specifications and method of operation. We hope that it is just as slick and lightweight as it’s more expensive Walther brethren. Details about the dimensions would be nice to hear, although just from the photos it looks like it will probably work fine with holsters made for other Walther handguns.

We’d like to know more about the hammer. It’s bobbed and recessed, so to pre-tension it we assume the slide needs to be racked or partially-racked. We don’t know if the trigger will be able to actuate the hammer if it is not pre-tensioned, that is to say, is the pistol capable of double-action operation?

And we’d like to know if there have been any other changes besides just a new method of operation that’s involved with keeping the price down, such as the use of less expensive materials or a different finish. Or maybe it’s just something about the shape, so Hi-Point-like, that makes it that much more affordable.